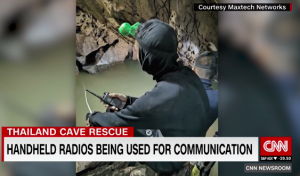 ‘We haven’t thought about nothing – just to save those kids’ lives,’ said Israeli entrepreneur Uzi Hanuni. The technology behind the handheld radios created by Maxtech Networks is what has allowed rescuers to communicate during their mission to rescue the soccer team trapped in a cave in northern Thailand.

The world breathed a collective sigh of relief yesterday as rescuers in Thailand found the soccer team of 12 boys and their coach who had been stranded in a cave for 10 days. The moment, broadcast on screens across the globe, was nothing short of miraculous.

A football team in Thailand was found after being missing in a cave for nine days. An Israeli tech company Maxtech Network was involved in helping find them.

Supplies of food, electrolytes and medicine were sent into the cave to give to the beleaguered team. Next up: Doctors will assess their condition, and then rescuers will work on a way to safely extricate the boys and the coach from the cave.

Since the team descended into the caves on June 23, the narrow passageways have become flooded due to heavy rains in the area. “Trying to take nondivers through a cave is one of the most dangerous situations possible, even if the dives are relatively easy,” Anmar Mirza, a cave rescue expert, told The Associated Press.

Rescue workers and humanitarian aid arrived from at least six countries – including the United States and Israel. Helping with the efforts is an Israeli company called Maxtech Networks, which allows for mobile communication in places where there are no cell phone networks.

As soon as they heard about the mission, employees from the company gathered all the necessary equipment and hopped on a plane to Thailand. The company’s founder and CEO is Uzi Hanuni, a serial Israeli entrepreneur and alumnus of Hebrew University. “We haven’t thought about nothing – just to save those kids’ lives,” he said.