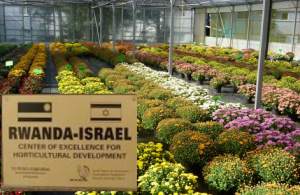 Rwanda and Israel have reiterated their commitment to keep strengthening bilateral cooperation in boosting Rwanda’s agriculture sector. The commitment was reiterated on January 23, 2017 during a meeting held in Kigali by Minister of Agriculture and Animal Resources, Dr Gerardine Mukeshimana, and Israeli Ambassador to Rwanda Belaynesh Zevadia.

The cooperation between the two countries has been over the last few years strengthened by important agricultural projects including professional internship programme that has been enabling Rwandan young graduates to pursue agricultural courses in Israel since 2012, among other projects.

“We are committed to invest in such an organized country,” pointed out Belaynesh Zevadia, Israeli ambassador to Rwanda. “We will keep mobilizing our investors to invest and bring expertise in Rwanda’s agriculture as the sector is highly developed in our country.”

Speaking during the meeting, Minister Mukeshimana praised the flourishing cooperation between both countries; adding that more projects such as strengthening the Rwandan dairy industry, and drip irrigation with the Israeli Government are very important.

Every year since 2012, hundreds of Rwandan university fresh graduates go to Israel for an 11-month internship in vegetable farming, fruit tree farming, plant protection, soil conservation, irrigation techniques, advanced agriculture under international standards, computer economics, project planning, and post-harvest courses. So far, 626 Rwandan students have attended the internship, and they are grouped into a cooperative where they started their own horticulture projects.

“Most of the Israeli trained students are engaged in building the farmers’ capacity to utilize the newly set irrigation infrastructure,” added Mark Bagabe Cyubahiro, the Director General of Rwanda Agriculture Board (RAB).

In addition, a Center of Excellence for Horticultural Development in Rwanda is under construction in Kigali, Mulindi site; following a Declaration of Intent signed by the Minister of Agriculture and Animal Resources and the Israeli Minister of Foreign Affairs on June 11, 2014 in Kigali.

The primary purpose of the center is to create a self sustaining center for agricultural production, training, and the demonstration of new and more efficient production methods, irrigation systems, post harvest handling and marketing of fresh products.