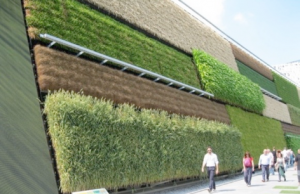 A vertical green field, multimedia installations and the stories of industrious people, cutting-edge technologies and thriving companies that made the desert blossom. At Expo Milano 2015 Israel will present the Fields of Tomorrow. From the creation of the “Super Wheat”, the original wheat from biblical times, to the most modern technologies that have made the desert bloom.

This is the Israeli Pavilion at Expo, which welcomes visitors with a spectacular ‘vertical field’ growing wheat, corn and rice. At Expo Milano 2015 Israel presents “Fields of Tomorrow”, a pavilion dedicated to the traditions of the “land flowing with milk and honey” but also to the most advanced sustainable technologies in agriculture and food”, Israeli ambassador Naor Gilon explained to Adnkronos.

“The exhibits include a vertical green field, multimedia installations and the stories of an industrious people, cutting-edge technologies and innovative companies but also”, said Gilon “Israel’s commitment to sharing of the know-how and the research results for renewal in the future.”

A young country, but also with a tradition stretching back three thousand years, in less than seventy years Israel has succeeded in transforming a prevalently arid landscape into fertile land and becoming one of the most advanced countries in the field of scientific and technological innovation. The Israeli Pavilion wishes to recount all this. Designed by architect David Knafo and constructed by Avant Video Systems with 100% recyclable materials, it stands alongside the Italian Pavilion at the crossroads between the Cardo and the Decumano, the two main axes of Expo Milano 2015.

A vertical field growing mainly wheat, corn and rice welcomes the visitors. Inspired by real crops, the green wall does not play a merely aesthetic role but introduces Vertical Planting, a revolutionary technology that allows saving and optimization of land and water. The route of the visit reveals cutting-edge technologies, exhibits sustainable projects and relates the life of the Israeli people.

In the entrance lobby, actors and performers interact with the public while videos are projected on the walls. The first part of the exhibit relates the story and the lives of three generations of farmers who have succeeded in making the desert bloom.

One section of the exhibit is dedicated to the KKL-JNF Forest. With 240 million trees planted in the last seventy years, the Keren Kayemeth LeIsrael – Jewish National Fund is reforesting the landscape of Israel. The KKL-JNF offers new chances to ecosystems at risk, creating a seed bank, developing botanical nurseries and planting trees. Thanks to the donations from Israel and from around the world, the KKL-JNF also develops social and environmental projects throughout Israel. Israel is the only country in the world that has more trees today than it did a century ago.

The visitors are then guided to a large darkened room in which lights project into the sky a virtual field and films dedicated to four cutting-edge projects. Biotechnology: the re-creation of the Super Wheat, the original and not genetically mutated wheat of biblical times, that grew three thousand years ago.

There are three other agricultural projects exhibited: the application of digital and satellite technologies to management of the fields, an innovative irrigation project in Africa and the most advanced livestock technologies in an industrial milking center in Asia.

The Pavilion has an outdoor rest area, with a restaurant that offers hummus, falafel, salads and other recipes from Israeli cuisine. On the first floor of the building a panoramic terrace offers a view from the top of the Expo while an events area hosts conferences, exhibits and parties. A green area with trees, benches and a cobbled path leads back  to the entrance, running along the vertical field.