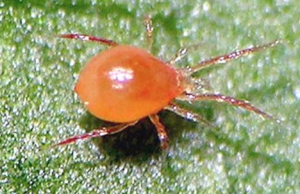 Some 600 million carnivorous spiders that were raised in BioBee labs in Kibbutz Sde Eliyahu will be flown to agricultural fields in Colombia, to be used as natural pesticides. The tiny spider mites, marketed as Bio® Persimilis, are twice the size of the spider mites that harm crops.

BioBee personnel say the Israeli mite can eat large quantities of their harmful counterparts each day when the Persimilis encounters a harmful mite, it chases after it, bites down into it, and sucks it dry. Using these modified mites, Busy-Bee hopes, will allow for natural pest control over massive fields without deploying chemical pesticides.

BioBee noted the fast reproductive cycles of the Persimilis it grows from its incubation stage to an adult state in about a week. These modified mites are expensive and are sold for several thousand shekels per gram. Each unit handed out to the farmers seeking to use this method of pest control will include between 2,000-4,000 carnivorous spiders.

The natural predators are kept in refrigerated conditions until they arrive at their designated dispersal site; when they are released into the warm air, they begin reproducing and hunting at a rate of tens of thousands of mites per day.