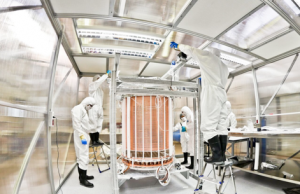 Ranny Budnik, Weizmann Institute of Sciences, is involved in the international team of XENON1T Project. Ranny Budnik: “My main activity at this time is the XENON Dark Matter direct detection project, located at Laboratori Nationali del Gran Sasso (LNGS) in central Italy. The Weizmann group is involved in many aspects of this project, and contributing significantly to the construction of the next phase detector XENON1T. I am also interested in other subjects related to astro-particle physics, which are looking for future prospects of detecting new and interesting physics. These include basic physics of xenon detectors, new detectors for nuclear recoils with extremely low energy threshold, and future detectors for Cosmic Rays. All these activities are based on-campus.”

There is five times more dark matter in the Universe than so-called normal matter — the atoms and molecules that we know. Yet we still don’t know what makes up this dark component. Yesterday, an international collaboration of scientists inaugurated the new XENON1T experiment, which has been designed to search for dark matter with unprecedented sensitivity, in the Gran Sasso Underground Laboratory in Italy. 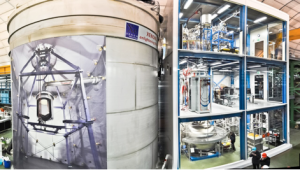 The Weizmann Institute’s Dr. Ran Budnik, head of the Weizmann Institute team that is participating in the experiment, explains: “Until now, evidence for dark matter – the matter thought to make up most of the Universe – has only been obtained indirectly, via inconsistencies in the gravitational interactions governing the dynamics of the cosmos.” The main candidate for dark matter is a stable elementary particle. This particle has escaped detection so far, although the researchers have a good idea of how it might look. “We expect that about 100,000 dark matter particles are passing each second through an area the size of a thumbnail,” says Budnik. “The fact that we have not detected them yet tells us that the likelihood of them interacting with the atoms of our detector is very small, and that we need extremely sensitive instruments in order to find the rare signature of such a particle.“ Budnik is a member of the international XENON Collaboration, which consists of 20 research groups from Israel, the US, Germany, Italy, Switzerland, Portugal, France, the Netherlands, Sweden and Abu Dhabi. XENON1T was inaugurated yesterday.

The event took place at the Laboratory Nazionali del Gran Sasso (LNGS), one of the largest underground laboratories in the world. “We need to put our experiment deep underground, using about 1,400m of solid rock to shield it from cosmic rays“, says Budnik. About 80 visitors were able to be physically present at the ceremony in the experimental site – the 110m long, 15m wide, 15m high Hall B of the LNGS laboratory. They shared this space with the XENON1T instrument, which is installed inside a 10m-diameter water shield that protects it from radioactive background signals. More guests followed the presentations in the LNGS auditorium, where Prof. Elena Aprile of Columbia University, New York, founder of the XENON project, illustrated the evolution of the XENON program from its early beginnings – a 3kg detector installed 15 years ago – to the present-day instrument XENON1T with a total mass of 3,500kg. 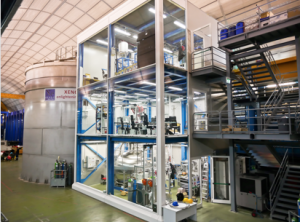 XENON1T employs the ultra-pure noble gas xenon in its liquid state, at –95°C. “If we are to have any chance of seeing rare interactions of a dark matter particle, we need an instrument with a large mass and an extremely low radioactive background,” says Budnik. “Objects without any radioactivity do not exist.  But we try to reduce and control for these radioactive contaminants as much as possible.”

Within the new Xenon setup are 248 photosensors, so sensitive they are able to detect the flash of light from a single photon. This setup – liquid xenon and detectors, are contained in a sort of double -walled vacuum flask. The xenon gas is purified, cooled and piped in a three-story facility that is glass-walled for visitors. A sphere that can accommodate 7.6 tons of liquid xenon sits on the ground floor. “This is more than two times the capacity we need for XENON1T, as we plan to increase the sensitivity of the experiment in the near future,” says Budnik.

Aiming for a dark matter detection

Budnik, whose group is responsible for the control system, the active water shield around the detector and the external calibration system for the new experiment: “The detector has been completed just a few days ago and we have already started to evaluate how it performs. The first results are expected for early 2016. “Even if we find mere hints in the next two years, we are in an excellent position to move on; we are already preparing the next step of the project, called XENONnT, which will increase the sensitivity to dark matter by another order of magnitude.”