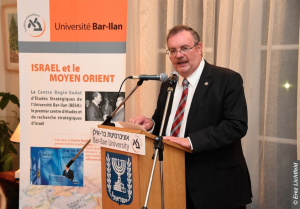 Israel Science Info was invited March 12 at the residence of the Israeli Ambassador to France, Yossi Gal, to celebrate the 60th anniversary of Bar-Ilan University with President of Bar-Ilan and Professor Daniel Hershkowitz. Maitre Anne-Judith Levy, organizer of this prestigious event, underlined that “Bar-Ilan has established a long-standing relationship with the French Jewish community. More than 300 French study on Bar-Ilan campus. Bar-Ilan, who knows the fastest growing into Israel, is the only Israeli university combining academic excellence, Jewish heritage and Zionist commitment.

” Students can enter 8 different faculties (including the new medical school in Galilee), and receive high-level teaching. This year, Bar-Ilan celebrates its 60th anniversary. Several events are planned in Israel and worldwide. Also involved in the organization of the evening, Dr. Merav Galili (global resources development director) Bar-Ilan and Vera Muravitz, president of the International Association of Friends of Bar-Ilan.

Phinergy whose CEO is Aviv Tzidon, was presented during this event. The Aluminum-Air battery for electric vehicles used by Phinergy was developped by Prof Arie Zaban of Bar-Ilan University and presented to President Obama during his visit to Israel.

Phinergy is a leading developer of breakthrough zero-emission, high energy-density systems based on metal-air energy technologies. The company’s primary focus is on aluminum-air and zinc-air batteries.

Unlike conventional batteries that carry oxygen, these batteries freely breathe oxygen from the ambient air to release the energy contained in metals.

The Company’s Aluminum-Air battery system has been successfully integrated into an electric vehicle resulting in more than three times the driving range of current EVs.