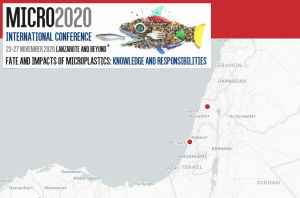 Presence of microplastic in the environment is increasingly being reported in natural and artificial water sources, soil, and even air. Plastic particles are detected everywhere, from North Pole snowflakes and deep sea near Japan to indoor environments of our offices and homes. Estimations show that by 2050, the total volume of plastic waste in the oceans will be greater than volume of the aquatic species themselves. Plastic particles can be divided to primary microplastics synthesized in a microscale range to various applications and secondary microplastics which are bulk plastic products degraded into small microparticles. The presence of primary and secondary microplastic in the aquatic environment poses risks to the environment and human health. Particularly, oral consumption of microplastic-containing in food and water by humans is a major potential throughput of microplastic into human body, suggesting gut epithelial cells as a primary target for their successful integration. Recent research focus is also given to the potential of microplastics to adsorb hydrophobic organic and inorganic micropollutants (e.g., pesticides, drugs, heavy metals). Thus, microplastics may act as vectors to aquatic pollutants into the human body. Our research focuses on the potential synergetic toxicity of microplastics and micropollutants. We conducted a set of adsorption tests using primary polystyrene microplastics with varying physicochemical properties and a commonly use pesticide (Triclosan) under environmentally – relevant conditions. Our results show that the microplastic surface functionality is a major factor which drives the adsorption. Further, we used human epithelial cells to evaluate the toxic effect of microplastics, micropollutants, and their combination. Our results suggest that microplastics act as a potential vector of micropollutants toward human cells, resulting in an increased toxicity due to elevated local concentration effects.

Wastewater treatment plants (WWTPs) serve as important routes for microplastics (MP) to the environment. However, more effective MP sampling and detection methodologies, as well as a better understanding of their influence on MP occurrence and distributions in WWTP effluents, are needed for better removal and control. In this study, the efficiency of a municipal WWTP to remove MP was assessed by collecting samples from raw to tertiary effluent during a 12-month sampling campaign (season-based) using different sampling methods (containers, 24-h composite and large grab samples). MP retrieved from different treatment units within the WWTP were identified and quantified using plastic/non-plastic staining followed by optical microscopy, SEM and μ-Raman microscopy. Overall, the mean removal efficiency of MP in the WWTP was 97%, with most MP removed by the secondary stage and a mean effluent concentration of 1.97 MP L−1 after sand filtration. The relative abundance of fibers increased 74% of the total MP to 91% between raw wastewater and treated effluent, with a corresponding decrease in particles. Taking seasonal variations into account is important as total MP concentration in the effluent was notably higher in winter compared with the other seasons. Increasing the sampled volume using large samples or 24-h composite samples significantly reduced the variability between replicates. However, MP concentration post the tertiary stage was significantly lower using morning sampling (9 am) by large grab sampling method (1.2 MP L−1) compared to 24-h composite sampling (3.2 MP L−1) possibly due to intra-daily changes. Using a finer mesh size (0.45 μm) to capture MP beyond the size range typically studied (≥20 μm) effectively quadrupled the number of MP detected in the tertiary effluent and highlights the importance of standardizing sampling procedures.