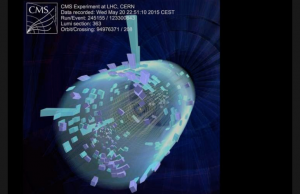 Daniel Lellouch, physicist at Weizmann Institute of Sciences and member of scientific committee of Israel Science Info, comments on the recent performance of the LHC that shakes the world scientific community: proton beams collided at a record energy of 13 teraelectronvolts (TeV) in the LHC (Large Hadron Collider)! “Three Israeli teams of Technion, Tel Aviv University and Weizmann Institute of Science are collaborating on ATLAS, one of the 4 experiments installed at the LHC. The Israeli physicists have built part of the equipment (a fast muon detector used as a triggering device). They have been very active in the data analysis that allowed the discovery of the Higgs boson.

With this upgrade in energy, the scientific community expects the discovery of elementary particles of a new type. These “supersymmetric” particles if they exist, could be the key to a mystery that has puzzled astronomers for nearly a century: three quarters of the matter that constitutes the universe is of a different nature from that of the known material. Answer within a year or two. Parts of the accelerator, in particular in the field of communications, have been produced by the Israeli high tech industry “. CERN, May 21th. Last night, protons collided in the Large Hadron Collider (LHC) at the record-breaking energy of 13 TeV for the first time. These test collisions were to set up systems that protect the machine and detectors from particles that stray from the edges of the beam.

A key part of the process was the set-up of the collimators. These devices which absorb stray particles were adjusted in colliding-beam conditions. This set-up will give the accelerator team the data they need to ensure that the LHC magnets and detectors are fully protected.

Today the tests continue. Colliding beams will stay in the LHC for several hours. The LHC Operations team will continue to monitor beam quality and optimisation of the set-up.

This is an important part of the process that will allow the experimental teams running the detectors ALICE, ATLAS, CMS, LHCb, LHCf, MOEDAL and TOTEM to switch on their experiments fully. Data taking and the start of the LHC’s second run is planned for early June.