Weizmann and Tel Aviv University: a new method to determine the exact rotation period of Saturn 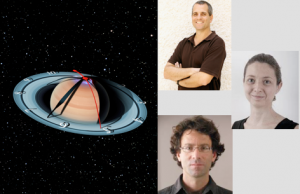 If you could jump a spaceship out past Mars and Jupiter to Saturn, pass by its rings and somehow park on the planet’s gaseous surface, how long would your day be there? This question, surprisingly, has not been precisely answered until now. The measurements – including those from the NASA Cassini spacecraft that is currently orbiting Saturn – have disagreed with one another, so they could be off by as much as a whopping 15 minutes. That range, says Dr. Yohai Kaspi of the Weizmann Institute’s Earth and Planetary Sciences Department, is a relatively large discrepancy for a giant planet with a day length – the planet’s rotation period – of just around ten and a half hours. Kaspi and his colleagues have now introduced a new method, that they used to accurately fix this fundamental value. Among other things, it can help scientists better understand the physical processes that shape Saturn and other planets like it.

Determining the exact rotation period of Saturn has been problematic because two of the more common methods are useless there. The planet is mostly gas, so its surface features – windy streams that move at varying speeds – conceal the turning of the planet’s solid core. Another method, used for planets like Earth and Jupiter, is to measure how the magnetic pole rotates around the true pole; but on Saturn these two poles are aligned, so that rotation can’t be measured. Until now the measurements of Saturn’s rotation period have relied on radio emissions tracked by nearby spacecraft.
Kaspi and research scientist Dr. Eli Galanti, working together with Dr. Ravit Helled of Tel Aviv University, devised a way to calculate the planet’s rotation period based on measurements of its gravitational fields. “This method,” says Kaspi, “basically works backwards from the gravitational field and shape of the planet.”  As a large body, eg., a planet, spins, its shape flattens out a bit, gaining a sort of “belly” at its middle, he explains. The faster it spins, the more pronounced this belly will be. The resulting redistribution of the planet’s mass, in turn, creates fluctuations in the gravitational field of the planet. The gravitational field has been well measured and calculated, both by planetary missions and by telescope data; thus the gravitational field measurements could be used to uncover the missing figures for the rotation that produced them.

The difficulty, says Galanti, was in the math. The equations originally contained too many variables to yield useful answers. So the team worked out a statistical method that reduced the uncertainties in the numbers. They then tested their method using figures for the gravitational field of Jupiter – a planet for which the rotational period has already been precisely calculated by the magnetic pole rotation method. When the gravitational field method yielded a number that precisely matched the known length of a day on Jupiter, the team applied it to Saturn’s rotation.

The figure they came up with matched the faster measurement, fixing the length of a day on Saturn at ten hours, 32 minutes. The uncertainty is now around 45 seconds – compared to the previous 15 minutes. Having a precise figure for Saturn, says Kaspi, will help researchers create models of how the planet formed and what goes on deep beneath its cloudy outer surface; but it will also provide another tool to help fix the rotation periods of other, farther out planets in the solar system and even beyond.