Ashdod Municipality to open a space-themed amusement park in 2018 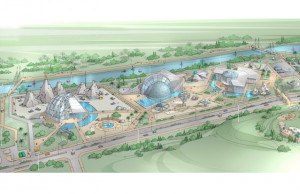 English magazine AM2 (Attractions Management Magazine) revealed in its February issue that Israel’s Ashdod Municipality has released plans for the development of a space-themed amusement park, to help inspire the next generation of intrepid space travellers. Working in conjunction with the Israel Space Agency, the 190,000sq m (47 acre) International Space Center in Ashdod will include a space shuttle simulator, space-related technology, interactive exhibits, movies, simulators, rides and games, with additional academic facilities including a space cadet training centre and Israel Space Park – a space research facility.

Ashdod Municipality, which has already allocated land for the project, says the development will be ready by 2018. The project is being financed by public donations and international funds.

“This project is of national importance for the State of Israel, an enterprise which will promote education for the younger generation in Israel, and the city of Ashdod in particular, and is encouraging the expansion of international cooperation in the fields of aerospace and science,” said Ashdod mayor, Yehiel Lasry to AM2.

According to Ashdod Municipality, the International Space Center will be the first-of-its-kind in Israel and will offer activities combining fun with learning. The municipality did not reveal the cost of the development.

Tom Anstey for AM2