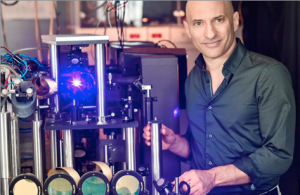 The eminent British scientist Stephen Hawking made predictions, 42 years ago, about elusive radiation emanating from black holes. Known as Hawking radiation, this phenomenon is too weak to observe with current techniques, and remained a “holy grail” for the fields of atomic physics, nonlinear optics, solid state physics, condensed matter superfluids, astrophysics, cosmology, and particle physics. It remained as such until Prof. Jeff Steinhauer’s observations of Hawking radiation in an analogue (model) black hole created at his Atomic Physics Lab in the Technion-Israel institute of Technology Faculty of Physics.

Pairs of phonons (particles of sound) appear spontaneously in the void at the event horizon (in layman’s terms, this is “the point of no return” in spacetime, beyond which events cannot affect an outside observer) of the analogue black hole. One of the phonons travels away from the black hole as Hawking radiation, and the other partner phonon falls into the black hole. The pairs have a broad spectrum of energies. It is the correlations between these pairs that allow for the detection of the Hawking radiation.

The Hawking and partner particles within a pair can have a quantum connection called “entanglement.” Steinhauer explains: “Using a technique we developed, we saw that high energy pairs were entangled, while low energy pairs were not. This entanglement verifies an important element in the discussion of the information paradox (the idea that information that falls into a black hole is destroyed or lost) as well as the firewall controversy (the theory that a wall of fire – resulting from the breaking of the entanglement between the Hawking particles and their partners – exists at the event horizon of a black hole).”

This observation of Hawking radiation, performed in a Bose-Einstein condensate (a quantum state of matter where a clump of super-cold atoms behaves like a single atom), verifies Hawking’s semiclassical calculation, which is viewed as a milestone in the quest for quantum gravity. The observation of its entanglement verifies important elements in the discussion of information loss in a real black hole.

Steinhauer has been working exclusively on the proof since 2009 in his hand-assembled lab, replete with lasers and dozens of mirrors, lenses, and magnetic coils to simulate a black hole. Motivated by an overriding curiosity regarding the laws of physics since he was a child, Steinhauer says that evidence for the existence of quantum Hawking radiation brings us one step further in our endless journey of discovering the laws of the universe. This understanding itself is important to human beings, as is the applications of the laws of physics in society.

Through the Wormhole, a Science Channel TV show hosted and narrated by Academy Award winner Morgan Freeman, featured Steinhauer back in 2012. Here, he discussed his creation of an analogue black hole in the lab and his hopes of using it to observe Hawking radiation. The analogue black hole takes advantage of his pioneering ultra-high resolution imaging system.