Steven Weinberg who radically changed the way we look at the universe, passed away on 23 July 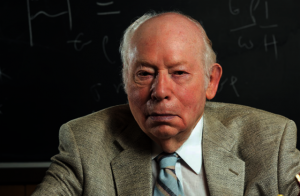 Steven Weinberg, one of the greatest theoretical physicists of all time, passed away on 23 July, aged 88. He revolutionised particle physics, quantum field theory and cosmology with conceptual breakthroughs which still form the foundation of our understanding of physical reality.

Weinberg is well known for the unified theory of weak and electromagnetic forces, which earned him the Nobel Prize in 1979, shared with Sheldon Glashow and Abdus Salam, and led to the prediction of the Z and W vector bosons, later discovered at CERN in 1983. His breakthrough was the realisation that some new theoretical ideas, initially believed to play a role in the description of nuclear strong interactions, could instead explain the nature of the weak force. “Then it suddenly occurred to me that this was a perfectly good sort of theory, but I was applying it to the wrong kind of interaction. The right place to apply these ideas was not to the strong interactions, but to the weak and electromagnetic interactions,” as he later recalled. With his work, Weinberg had made the next step in the unification of physical laws, after Newton understood that the motion of apples on Earth and planets in the sky are governed by the same gravitational force, and Maxwell understood that electric and magnetic phenomena are the expression of a single force.

In his research, Weinberg always focused on an overarching vision of physics and not on a model description of any single phenomenon. At a lunch among theorists, when a colleague referred to him as a model builder, he jokingly retorted: “I am not a model builder. In my life, I have built only one model”. Indeed, Weinberg’s greatest legacy is his visionary approach to vast areas of physics, in which he starts from complex theoretical concepts, reinterprets them in original ways, and applies them to the description of the physical world. A good example is his construction of effective field theories, which are still today the basic tool to understand the Standard Model of particle interactions. His inimitable way of thinking has been the inspiration and guidance for generations of physicists and it will certainly continue to serve future generations.

Steven Weinberg is among the very few individuals who, during the course of the history of civilisation, have radically changed the way we look at the universe.