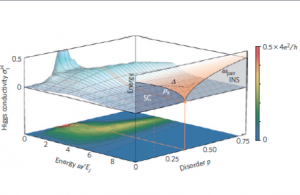 The Nobel Prize-winning discovery of the Higgs boson – the “God particle” believed responsible for all the mass in the universe – took place in 2012 at CERN’s Large Hadron Collider, an underground facility where accelerated sub-atomic particles zip around the circumference of a 27-kilometer (16.9-mile) ring-shaped tunnel.  But what goes around comes around: more than 50 years ago, the first hint of Higgs was inspired by the study of superconductors – a special class of metals that, when cooled to very low temperatures, allow electrons to move without resistance.

Now, a research team led by Israeli and German physicists has closed a circle, by reporting the first-ever observations of the Higgs mode in superconducting materials.

Unlike the mega-expensive sub-atomic smashups at CERN – a facility that cost about $4.75 billion to build – these findings, presented in the prestigious scientific journal Nature Physics, were achieved through experiments conducted in a regular laboratory at relatively low cost.

The discovery of the Higgs boson verified the Standard Model, which predicted that particles gain mass by passing through a field that slows down their movement through the vacuum of space.  “Just as the CERN experiments revealed the existence of the Higgs boson in a high-energy accelerator environment, we have now revealed a Higgs boson analogue in superconductors,” says Prof. Aviad Frydman, a member of Bar-Ilan University’s Department of Physics, who directed the study together with Prof. Martin Dressel, of Stuttgart University, as part of an international collaboration that also included other research teams from Israel, India and the United States. Doctoral student Daniel Sherman, a member of Frydman’s Bar-Ilan laboratory, conducted much of the investigation and is listed as the publication’s first author.

Frydman explains that the new discovery brings the search for the Higgs boson back to its source.  “Ironically, while the discussion about this ‘missing link’ in the Standard Model was inspired by superconductor theory, the Higgs mode was never actually observed in superconductors because of technical difficulties – difficulties that we’ve managed to overcome.”

In their Nature Physics publication, Frydman and his colleagues describe a new method for conducting Higgs physics experiments. “The high energy required to excite a Higgs mode in superconductors tends to break apart the electron pairs serving as this type of material’s basic charge.  This causes rapid decay into particle-hole pairs, and suppresses the material’s superconducting nature,” Frydman says. “We solved this problem by using disordered and ultra-thin superconducting films of Niobium Nitrite (NbN) and Indium Oxide (InO) near the superconductor-insulator critical point – a state in which recent theory predicted the rapid decay of the Higgs would no longer occur.  This created the conditions to excite a Higgs mode at relatively low energies.”

According to Frydman, observation of the Higgs mechanism in superconductors is significant because it reveals how a single type of physical process behaves under drastically different energy conditions.  “Exciting the Higgs mode in a particle accelerator requires enormous energy levels – measured in giga-electronvolts, or 109 eV,” Frydman says. “The parallel phenomenon in superconductors occurs on a different energy scale entirely – just one-thousandth of a single electronvolt. What’s exciting is to see how, even in these highly disparate systems, the same fundamental physics is at work.”

Moreover, the robust nature of the newly-observed Higgs mode in superconductors could make it easier for scientists to study the still-controversial “God particle” – the elusive “missing link” in the Standard Theory of particle physics believed responsible for imparting mass to all the matter in the universe. Thanks to this new approach, it may soon be possible to solve long-standing mysteries of fundamental physics, through experiments conducted – not in a multi-billion dollar accelerator complex – but on a laboratory tabletop.

Prof. Aviad Frydman, a member of the Bar-Ilan University Department of Physics who also holds an appointment at the University’s Institute for Nanotechnology and Advanced Materials (BINA), is an expert on mesoscopic physics – an area concerned with the fundamental physical problems that occur when a macroscopic object is miniaturized. Specifically, Prof. Frydman is exploring low-dimensional magnetism and superconductivity, subjects that are of interest to researchers because they hold the key to actualizing the potential of nanotechnology for the manufacture of super-miniaturized electronic devices.