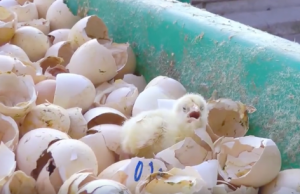 Amid the recent, growing opposition to tightly caged hens, another practice in the poultry industry has drawn less notice: All male chicks born at egg farm hatcheries are slaughtered the day they hatch. This is typically done by shredding them alive, in what amounts to a blender.

This mass culling of billions of newborn chicks each year has upset not only animal welfare groups, but the egg industry itself has recognized a need to end the process. And that has fueled a quiet international race to develop technology to determine the gender of a chicken egg before it hatches, known as in-ovo sexing.

Male chicks are “macerated,” as the egg industry calls the slaughter, because according to the hard math of modern-day poultry farming, the males are useless: They cannot grow up to lay eggs, and they’re not the fast-growing breeds that are sold as meat.

Now a Texas-based company that sells eggs from pasture-raised hens has entered the race to make an industrial-scale sexing technology, saying it has developed a method that can be used the day eggs are laid. Vital Farms, whose eggs are carried by 5,000 stores nationwide, told The Washington Post this week that it hopes to make the technology, which it developed in partnership with the Israeli tech firm Novatrans, commercially available within a year.

It says its technology would solve an animal welfare problem as well as a financial one for egg hatcheries, which under current methods spend money incubating eggs for 21 days and then sorting out by hand — and culling — the males that hatch from half of them. Male eggs could instead be sold on grocery shelves, Vital Farms chief executive Matt O’Hayer said.

The wide-scale adoption of in-ovo sexing technology would be another win for chickens, which have become some of the more the unlikely beneficiaries of the animal welfare movement. In recent years, animal rights activists have successfully pressured hundreds of U.S. and international companies into vowing to switch to using only cage-free eggs. That, in turn, has prompted the American egg industry to acknowledge that uncaged hens are the way of the future, although it says farmers — which must overhaul their systems — are not happy about it. 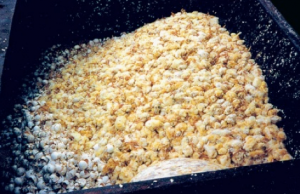 Given the labor and other costs involved, the egg industry has an incentive to stop killing male chicks. Momentum on the issue began to grow in 2014, when Unilever, which owns Hellman’s mayonnaise and other egg-using companies, committed to supporting in-ovo technology research and adopting it. The German government pledged to end male chick culling by 2017, though the country’s parliament later voted down a ban. Animal rights groups’ video investigations of culling methods — which sometimes involve gassing or suffocating chicks — also have become more common.

In contrast to its reluctant acquiescence to the cage-free movement, the U.S. egg industry fairly quickly signed onto supporting an end to chick culling. In June, United Egg Producers, which represents 95 percent of American egg farms, said in an announcement coordinated with the animal rights group the Humane League that it would end the culling by 2020 “or as soon as” the technology is “commercially available and economically feasible.”

[How eggs became a victory for the animal welfare movement]

“We are aware that there are a number of international research initiatives underway in this area, and we encourage the development of an alternative with the goal of eliminating the culling,” Chad Gregory, the president and chief executive of United Egg Producers, said in a statement in June.

Gregory was referring to a handful of ongoing efforts to develop in-ovo sexing technology. At least three initiatives have said they are less than two years away from launching their products.

Egg Farmers of Ontario, a Canadian trade body, told an international egg conference this year that it had patented a process to sort eggs by gender with 95 percent accuracy before incubation, and that it hoped to have a prototype ready by the end of 2016. Researchers at two German universities have said they are working on a method that involves poking a small hole in an eggshell and shining in an infrared light to determine in the first 72 hours of incubation whether it contains male or female chromosomes; they’ve said they expect it to be ready in 2017. A third method, being developed by Dutch start-up In Ovo, would run fluid from each egg through a mass spectrometer to determine the level of a biomarker that the company says can determine gender by the ninth day of incubation. The company has said it could have a working model by mid-2017.

Vital Farms’s work with Novatrans, however, had not been publicized until now. Paul Knepper, president of a subsidiary called Ovabrite that Vital Farms has launched to market its method, said it is different from other technologies in development because it does not involve puncturing the egg and is used on the day eggs are laid, keeping them viable for human consumption.

Knepper said it traps an egg’s metabolic byproducts — which he described as volatile organic compounds “given off by an egg as it ‘breathes’” — that carry a distinct, measurable male or female signature. The two-second-per-egg process is carried out by a device that Knepper said is about the size of a boardroom table…