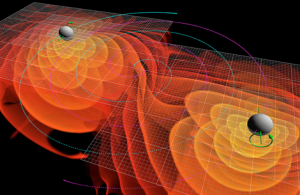 For the first time, scientists have observed ripples in the fabric of spacetime called gravitational waves, arriving at the Earth from a cataclysmic event in the distant universe. This confirms a major prediction of Albert Einstein’s 1915 general theory of relativity and opens an unprecedented new window onto the cosmos. Gravitational waves carry information about their dramatic origins and about the nature of gravity that cannot otherwise be obtained. LIGO opens New Window on the Universe with Observation of Gravitational Waves from Colliding Black Holes. Physicists have concluded that the detected gravitational waves were produced during the final fraction of a second of the merger of two black holes to produce a single, more massive spinning black hole. This collision of two black holes had been predicted but never observed. The gravitational waves were detected on September 14, 2015 at 5:51 a.m. Eastern Daylight Time (9:51 a.m. UTC) by both of the twin Laser Interferometer Gravitational-wave Observatory (LIGO) detectors, located in Livingston, Louisiana, and Hanford, Washington, USA. The LIGO Observatories are funded by the National Science Foundation (NSF), and were conceived, built, and are operated by Caltech and MIT. The discovery was made by the LIGO Scientific Collaboration (which includes the GEO Collaboration and the Australian Consortium for Interferometric Gravitational Astronomy) and the Virgo Collaboration using data from the two LIGO detectors. Around a hundred scientists working in six laboratories associated with the CNRS contributed to the discovery, as part of the Virgo collaboration.

By a remarkable historical coincidence, exactly 100 years after the publication of Einstein’s general theory of relativity, an international team has confirmed one of its major predictions by detecting gravitational waves directly for the first time ever. The discovery was coupled with the first observation of the final spinning ‘dance’ of two black holes on the point of merging.

On the basis of the data, LIGO and Virgo scientists estimate that the two black holes merged 1.3 billion years ago and that their masses were about 29 and 36 times that of the Sun. By comparing the arrival times of the gravitational waves at the two detectors (a difference of 7 milliseconds) and studying the characteristics of the signals measured by the LIGO and Virgo collaborations, scientists have shown that the source of the gravitational waves was probably located in the Southern hemisphere. Locating the source more precisely would have required extra detectors. This will be the case when Advanced Virgo begins operation in late 2016.

According to the general theory of relativity, a pair of black holes orbiting around each other loses energy through the emission of gravitational waves. The two bodies gradually approach each other, a process that can last billions of years, before rapidly accelerating in the final moments. In a fraction of a second, the two black holes collide at around half the speed of light, merging to form a single black hole. The new body is less massive than the sum of the two original black holes since part of their mass (in this case, the equivalent of three solar masses) has been converted into a colossal amount of energy, given by Einstein’s famous equation E=mc2, which is emitted as a burst of gravitational waves. It is these gravitational waves that were detected by the LIGO and Virgo collaborations. Indirect evidence of the existence of gravitational waves was first obtained by the observation of an object called PSR 1913+16, discovered in 1974 by Russell Hulse and Joseph Taylor, who were awarded the Nobel Prize in Physics in 1993. PSR 1913+16 is a binary system made up of a pulsar in orbit around a neutron star. Taylor and Joel Weisberg studied the pulsar’s orbit for thirty years, and showed that it was very slowly shrinking. The rate at which this was occurring corresponded exactly to that expected if the system was losing energy in the form of gravitational waves. The two bodies making up the PSR 1913+16 system are not expected to collide any time soon, in fact not for another 300 million years or so. Building on this discovery, the LIGO and Virgo collaborations were able to directly observe the signal emitted in the final moments of the life of another binary system made up of two black holes, when they merged into a single black hole.

Detecting a phenomenon as elusive1 as gravitational waves has taken more than 50 years in a worldwide endeavor to design increasingly sensitive detectors. Today, with this first direct detection, the LIGO and Virgo collaborations have opened up a new era for astronomy: gravitational waves are a new messenger from the cosmos, and the only one emitted by certain astrophysical objects such as black holes.

LIGO research is carried out by the LIGO Scientific Collaboration (LSC), a group of more than 1000 scientists from universities around the United States and in 14 other countries. More than 90 universities and research institutes in the LSC develop detector technology and analyze data; approximately 250 students are strong contributing members of the collaboration. The LSC detector network includes the LIGO interferometers and the GEO600 detector. The GEO team includes scientists at the Max Planck Institute for Gravitational Physics (Albert Einstein Institute, AEI), Leibniz Universität Hannover, along with partners at the University of Glasgow, Cardiff University, the University of Birmingham, other universities in the United Kingdom, and the University of the Balearic Islands in Spain.

Virgo research is carried out by the Virgo Collaboration, consisting of more than 250 physicists and engineers belonging to 19 different European laboratories: 6 from Centre National de la Recherche Scientifique (CNRS) in France; 8 from the Istituto Nazionale di Fisica Nucleare (INFN) in Italy; 2 in the Netherlands with Nikhef; the Wigner RCP in Hungary; the POLGRAW group in Poland; and the European Gravitational Observatory (EGO), the laboratory hosting the Virgo interferometer near Pisa in Italy.

Virgo was born thanks to the visionary ideas of Alain Brillet and Adalberto Giazotto. The detector was designed based on innovative technologies expanding the sensitivity to the low frequency range. The construction started in 1994 and it has been funded by CNRS and INFN; since 2007 Virgo and LIGO have shared and jointly analysed the data taken by all the interferometers of the international network. After the start of the LIGO upgrade, Virgo took data until 2011.

The Advanced Virgo project, funded by CNRS, INFN and Nikhef, was then launched: the new detector will be in operation before the end of the year. In addition several institutes and universities of the five European nations of the Virgo Collaboration contribute both to the Advanced Virgo upgrade and to the discovery effort.

Committed for more than twenty years to the construction of Virgo and then Advanced Virgo, France is among the frontrunners in the search for gravitational waves. The partnership forged with LIGO for the operation of the LIGO and Virgo instruments has led to the direct participation of French laboratories in both data analysis and the writing and validation of scientific publications. It is a continuation of a long-standing technical collaboration with LIGO, which has for instance resulted in the treatment of LIGO mirror surfaces being carried out in Villeurbanne, France. The scientific publication of the LIGO and Virgo collaborations announcing their discovery is co-signed by 75 French scientists in six teams from the CNRS and associated universities:
–    AstroParticule et Cosmologie laboratory (Université Paris Diderot/CNRS/CEA/Observatoire de Paris), Paris;
–    ‘Astrophysique Relativiste, Théories, Expériences, Métrologie, Instrumentation, Signaux’ laboratory (CNRS/Observatoire de la Côte d’Azur/Université Nice Sophia Antipolis), Nice;
–    Laboratoire de l’Accélérateur Linéaire (CNRS/Université Paris-Sud), Orsay;
–    Laboratoire d’Annecy-le-Vieux de Physique des Particules (CNRS/Université Savoie Mont Blanc), Annecy-le-Vieux;
–     Laboratoire Kastler Brossel (CNRS/UPMC/ENS/Collège de France), Paris;
–     Laboratoire des Matériaux Avancés (CNRS), Villeurbanne.

The discovery was made possible by the enhanced capabilities of Advanced LIGO, a major upgrade that increases the sensitivity of the instruments compared to the first generation LIGO detectors, enabling a large increase in the volume of the universe probed—and the discovery of gravitational waves during its first observation run. The US National Science Foundation leads in financial support for Advanced LIGO. Funding organizations in Germany (Max Planck Society), the U.K. (Science and Technology Facilities Council, STFC) and Australia (Australian Research Council) also have made significant commitments to the project. Several of the key technologies that made
Advanced LIGO so much more sensitive have been developed and tested by the German UK GEO collaboration. Significant computer resources have been contributed by the AEI Hannover Atlas Cluster, the LIGO Laboratory, Syracuse University, and the University of Wisconsin-Milwaukee.  Several universities designed, built, and tested key components for Advanced LIGO: The Australian National University, the University of Adelaide, the University of Florida, Stanford University, Columbia University of New York, and Louisiana State University.

1During the event on 14 September 2015, the length of the interferometer arms varied by one hundred millionth of the size of an atom.
Publication in Physical Review Letters