MUV (Israel): Bird will turn every surface into a touchable interactive screen 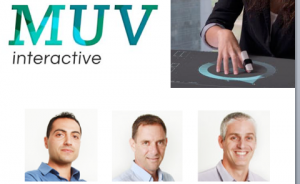 MUV Interactive’s trailblazing Bird wearable will turn every surface into a touchable interactive screen through motion, touch and voice. Four years ago, investors rejected Rami Parham’s concept of a wearable device for interacting with one’s digital environment based on finger movement sensing. But he didn’t give up, and when the wearable technology wave  hit in 2013, Parham’s MUV Interactive  was in the right place at the right time.

In June, MUV will start shipping its ring-like Bird to the few thousand customers who pre-ordered the revolutionary wearable. Later on, MUV will launch Sphere, a device that is installed on the ceiling (like a light bulb) to project content from connected devices onto any surface via touch, motion and voice.

Coupled with Bird, Sphere will enable users to answer the phone by tapping on a chair, or watch TV on a kitchen counter, heralding a new way of living enhanced by the Internet of Things (IoT).

“This startup can turn your sofa into a smartphone,” predicted Bloomberg Business. While, Gartner listed the Israeli company as a “Cool Vendor in Human-Machine Interface.”

“So many people told us this was impossible,” Parham tells ISRAEL21c. “In 2011, VCs didn’t understand why we’d want a wearable solution. Maybe I could have quit and moved on, but then the wearable era started and the biggest companies got into it, so I was the first to get funded because I already had the patent. Those same VCs are now in open negotiations with us to invest in the company.”

The 29-year-old CEO likens his invention to a new-age mouse to control every device you own.

“Bird can actually sense what your fingers are doing, where you are in the room exactly, and where you’re pointing right down to resolution of a pixel, so we can enable you to touch any of your devices remotely, turning any display into a touch screen,” Parham explains. “You only need this one simple Bluetooth-connected device to enable the entire spectrum of interaction.”