Stressing Material Exchange: A receptor in the brain is found to regulate stress responses differently in male and female mice 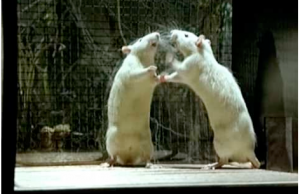 How does stress, which, among other things, causes our bodies to divert resources from non-essential functions, affect the basic exchange of materials that underlies our everyday life? Weizmann Institute of Science researchers investigated this question by looking at a receptor in the brains of mice, and they came up with a surprising answer. The findings may in the future aid in developing better drugs for stress-related problems and eating disorders.

Dr. Yael Kuperman began this study as part of her doctoral research in the lab of Prof. Alon Chen of the Neurobiology Department. Kuperman, presently a staff scientist in the Veterinary Resources Department, Chen and research student Meira Weiss focused on an area of the brain called the hypothalamus, which has a number of functions, among them helping the body adjust to stressful situations, controlling hunger and satiety, and regulating blood glucose and energy production.

When stress hits, cells in the hypothalamus step up production of a receptor called CRFR1. It was known that this receptor contributes to the rapid activation of a stress-response sympathetic nerve network – increasing heart rate, for example. But since this area of the brain also regulates the body’s exchange of materials, the team thought that the CRFR1 receptor might play a role in this, as well.

Chen and his group characterized the cells in a certain area of the hypothalamus, finding that the receptor is expressed in around half of those that arouse appetite and suppress energy consumption. These cells comprise one of two main populations in the hypothalamus – the second promotes satiety and burning energy. “This was a bit of a surprise,” says Kuperman, “as we would instinctively expect the receptor to be expressed on the cells that suppress hunger.”

To continue investigating, the researchers removed the CRFR1 receptor just from the cells that arouse appetite in the hypothalamus, in lab mice, and then observed how this affected their bodily functions. At first, they did not see any significant changes, confirming that this receptor is saved for stressful situations. When they exposed the mice to stress – cold or hunger – they got another surprise.

When exposed to cold, the sympathetic nervous system activates a unique type of fat called brown fat, which produces heat to maintain the body’s internal temperature. When the receptor was removed, the body temperature dropped dramatically – but only in the female mice. Even afterward their temperatures failed to stabilize, while male mice showed hardly any change.

Fasting produced a similarly drastic response in the female mice. Normally when food is scarce, the brain sends a message to the liver to produce glucose, conserving a minimum level in the blood. But when food was withheld from female mice missing the CRFR1 receptor, the amount of glucose their livers produced dropped significantly. In hungry male CRFR1-deficient mice, like those exposed to cold, the exchange of materials in their bodies was barely affected.

“We discovered that the receptor has an inhibitory effect on the cells, and this is what activates the sympathetic nervous system,” says Kuperman.

Among other things – revealing exactly how this receptor works and how it contributes to the stress response – the findings show that male and female bodies may exhibit significant differences in the ways that materials are exchanged under stress. Indeed, the fact that the receptor suppresses hunger in females may help explain why women are much more prone to eating disorders than men.

Because drugs can enter the hypothalamus with relative ease, the findings could be relevant to the development of treatments for regulating hunger or stress responses, including anxiety disorders or depression. Indeed, several pharmaceutical companies have already begun developing psychiatric drugs to block the CRFR1 receptor. The scientists caution, however, that because the cells are involved in the exchange of materials, blocking the receptor could turn out to have such side effects as weight gain.