Women and science: Prof Gili Kenet Searches for a Cure to Hemophilia 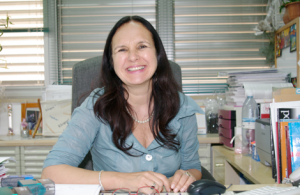 BioMarin, a leading American biotechnology company (BMRN-NASDAQ), recently tabbed Sheba Medical Center’s Professor Gili Kenet, to conduct research and a clinical trial of the revolutionary gene therapy product that has shown promise as the “magic bullet” cure for hemophilia A, the dreaded blood disease.A single dose of new ground-breaking treatment might be enough to arrest or cure hemophilia.

As a result of the initial trial conducted by BioMarin on 9 patients, they all stopped using clotting factor drugs to treat their hemophilia, and their annualized bleeding rate fell about 16 episodes a year to just one!  “Their bleeding rates collapsed to zero or nearly zero and we’ve improved their quality of life beyond recognition,” said one of the doctors associated with the initial trial.

Sheba Medical Center was chosen to take part in the next phase of international trials and will start enrolling patients (pending Ministry of Health approval, of course) in 2018. Sheba was selected as a result of their excellent record conducting multicenter international therapeutic trials and basic research in patients with hemophilia and severe coagulation disorders.

Professor Gili Kenet, Director of the National Hemophilia Center at Sheba Medical Center revealed, “So far, 9 patients were cured and followed for over 1 year, after 1 infusion of gene therapy product (normal “engineered” gene of coagulation factor, delivered via AAV-(Adeno associated virus) vector to patients’ blood and to their liver, inducing production of the normal factor in hepatocytes). After the initial research results people in the medical community are beginning to speak about curing hemophilia after a one time treatment with this new drug.”

The National Hemophilia Center at Sheba is also a leading international Hemophilia Training Center (HTC). The center currently treats over 700 hemophiliacs a year with over 50 patients currently participating in clinical studies. These studies are led by Professor Kenet and her team of physicians and experienced study coordinators, who recently underwent 2 FDA inspections, and were graded as excellent.

Professor Kenet is a world renowned expert on hemophilia, thrombosis and hemostasis and is the author of over 190 medical manuscripts, many of which have been published in noted journals such as the New England Journal of Medicine and Lancet (UK). She is also an active member of the American Society of Hematology, World Federation of Hemophilia and Israeli Society of Pediatric Hematology and Oncology and Israel Thrombosis Society. She has chaired the scientific subcommittee (SSC) of ISTH (Int’l Society of Thrombosis and Hemostasis for pediatric and perinatal hemostasis and currently co-chairs the SSC of FVIII, FIX (genes encoded for blood coagulation), and rare bleeding disorders.

She added, “Indeed these are exciting times, as there are options to cure hemophiliac patients. We are hoping that results of this trial at Sheba will be successful so that this is will become the therapy that finally eradicates this disease once and for all.”