Tel Aviv University: Your Better Half (by Half?), Improving Your Fitness May Improve Your Spouse’s 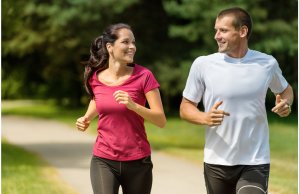 With obesity on the rise in households across America, the demand for weight-loss treatments, personal trainers, and lifestyle coaches is amping up. But when it comes to physical fitness, the best incentive to get in shape might be the very person sitting across from you at the dinner table.

New research finds that exercising isn’t only good for you — it’s also good for your spouse. According to Dr. Silvia Koton of the Department of Nursing at Tel Aviv University’s Sackler Faculty of Medicine, lead investigator Dr. Laura Cobb, and their colleagues at the Johns Hopkins Bloomberg School of Public Health, if one spouse improves his or her exercise regimen, the other spouse is much more likely to follow suit. The study, presented last month at the American Heart Association’s EPI/Lifestyle 2015 Scientific Sessions in Baltimore, suggests that a better approach to helping people boost their physical activity might be to coach married couples together instead of individually.

“It was well known that spouses exhibit similar risky behaviors like smoking and drinking, but it wasn’t clear how an individual’s level of physical activity was influenced by changes in his or her spouse’s level of physical activity,” said Dr. Koton. “Our study tells us that spouses can have a positive impact on one another in terms of staying fit and healthy over time.”

For the purpose of the study, the researchers examined records from the Atherosclerosis Risk in Communities (ARIC) Study, which in 1987 began following a group of 15,792 middle-aged adults from communities in Maryland, North Carolina, Minnesota, and Mississippi. Dr. Koton and her colleagues analyzed data from two medical visits conducted roughly six years apart. At each visit, the researchers asked 3,261 spouse pairs about their physical activity levels.

The Physical Activity Guidelines for Americans, established by the U.S. Department of Health and Human Services, recommends that adults should exercise at a moderate intensity for a minimum of 150 minutes per week or at a vigorous intensity for at least 75 minutes per week. During the first visit, 45% of husbands and 33% of wives met these recommendations. Six years later, they found that when a wife met recommended levels of exercise at the first visit, her husband was 70 percent more likely to meet those levels at subsequent visits than those whose wives were less physically active. Likewise, when a husband met recommended exercise levels, his wife was 40% more likely to meet the levels at follow-up visits.

“Our findings suggest that physical activity promotion efforts should consider targeting couples,” said Dr. Koton. The study of theoretical models and mechanisms, which may explain changes in the levels of physical activity in couples over time, is a promising area for future research, she says.