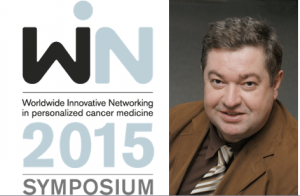 At WIN Symposium in Paris 29-30th June 2015, attendees will hear the latest about cancer research and precision cancer medicine from global key opinion leaders: James Allison, James Doroshow, Andrea Califano, John Mendelsohn, Francesco Pignatti and others. View the final WIN Symposium program with all lecture topics and speakers, and 80 posters on a diversity of highly contemporary topics. An international meeting (over 35 countries represented) not to be missed by anyone involved in the discovery, development and implementation of precision cancer medicine. Interact with top scientists and executives from all stakeholders in cancer research and patient care.
This program is endorsed by leading cancer organizations: ASCO*, EORTC, ESMO, ESO, UICC, and fully accredited as CME.

WIN Consortium was founded by Vladimir Lazar, COO of WIN. Dr Vladimir Lazar was born Romania in 1965. He obtained his MD (1989) at The University of Timisoara (Romania), became a Specialist in Medical Biology and obtained his PhD in molecular biology (1977) at The University Ren? Descartes in Paris. He is the Director of IGR?s Genomics Centre and is the Head of IGR?s Integrated Biology platform and Research & Development. He leads IGR?s Agilent Worldwide Certified Service Provider as well as the Agilent European Reference and training center. Since 2007 he has coordinated the genomics Work Package for the EU FP6 CHEMORES Consortium (www.chemores.org).  Dr Vladimir Lazar, M.D, Ph.D. is specialized in molecular biology, molecular pathology and Medical Biology, with more than 10 years experience in the area of translational and biomarker research in oncology,,He is heading the R&D and technology development.at IGR Genomic Centre. He runs the biomarker discovery programs of clinical trials performed at Institut Gustave Roussy in cooperation with the SITEP (Innovative therapeutics and Early Phase Clinical Trials Unit) at IGR headed by Prof. Jean-Charles Soria.

WIN Consortium launches breakthrough projects and trials with the aim to enable moving from a target or pathway driven therapeutic approach to cancer treatment to a systems biology approach with combination therapies, to better address the complexity of the disease.

Lung cancer is the leading killer of all cancers worldwide. The outcome depends heavily on when the disease is diagnosed. But therapeutic strategies are also key, and those currently available are only making modest inroads into mortality rates. The EU-funded project WINTHER set out to improve methods for predicting the efficacy of drugs in cancer patients in a ground-breaking new approach to targeted therapies.

Today, cancer-targeted therapies are primarily aimed at tackling detected oncogenic mutations or other DNA aberrations. However, only 40% of patients benefit from this approach, because targetable DNA anomaly cannot be detected in all cases.

Within the WINTHER project, an international team of researchers coordinated by Jean-Charles Soria of the Gustave Roussy Institute in France complemented the traditional DNA-based approach with RNA-based investigation, effectively enabling personalised therapy for those patients with any kind of advanced solid malignant tumour that does not display any targetable DNA anomaly.

To this effect, WINTHER introduced – and this was a first in a clinical trial – the concept of dual biopsies from the tumour and the normal tissue with which it had been matched to see how messenger RNA (mRNA) is expressed differently in the two. The assumption made was that drugs targeting those tumour genes which showed the greatest difference compared with the normal tissue would be most effective.

“When a tumour biopsy is investigated by measuring levels of mRNA, it is not possible to distinguish between the ‘genetic background noise’ and the useful information related to tumour-intrinsic abnormalities. Thanks to the dual biopsy, WINTHER was able to filter out this background noise,” says Gustave Roussy’s Vladimir Lazar, scientific coordinator of WINTHER and a founder of the WIN Consortium, in which WINTHER is embedded.

“The WIN Consortium, a joint project of the Gustave Roussy Institute and the MD Anderson Cancer Center in the USA, brings together 40 members from across the globe, aiming to achieve together what no institution can achieve alone: significantly improving patient survival rates,” Alexander Eggermont, General Director of Gustave Roussy and Vice Chair of the WIN Consortium, explains.

“We are grateful for the visionary support of EU for WINTHER,” adds WIN Chairman John Mendelsohn of MD Anderson Cancer Center and part of the WINTHER coordination team.

Although the trial is still on going, it already suggests that this mRNA-based strategy is in no way inferior to the standard DNA-based approach when it comes to performance. However, WINTHER – just like other monotherapeutic approaches in which only a single therapy is used – provides only modest benefit for patients overall.

Based on these observations and lessons learnt from WINTHER, the consortium created a Simplified Interventional Mapping System (SIMS) algorithm as a tool to promote the integration of both DNA and RNA information to inform therapeutic decisions and use of combinations of targeted therapies.

The SIMS method, recently presented in a paper in science journal Oncotarget, merges molecular information with knowledge about the impact of drugs on the hallmarks of cancer. SIMS describes 183 key genes grouped into 24 interventional nodes that targeted drugs can act on. The method integrates thousands of DNA and RNA measurements of dual biopsies into a simple 1 to 10 scoring system, ranking affected interventional nodes and determining the best triple-therapy combination(s) of drugs for each patient.

“Following the historical success of tri-therapy for AIDS, the WIN Consortium intends to investigate  and validate SIMS for assigning targeted tri-therapy for metastatic non-small cell lung cancer [NSCLC] in the upcoming SPRING [Survival Prolongation by Rationale Innovative Genomics] trial. NSCLC accounts for 21% of all cancer deaths, and less than 5% of patients are alive after 5 years. A combination of drugs is the logical evolution of today’s efforts in drug discovery,” Lazar explains, stressing that this is a win-win solution for all – patients, researchers and industry. The SPRING trial concept and design will be presented at the WIN 2015 Symposium from 29 to 30 June in Paris.