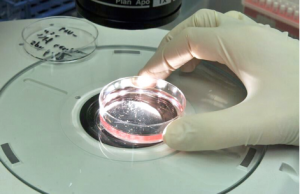 Clinical trials with a Hadassah-developed technology to treat fatty liver disease are moving forward in 25 medical centers, in the United States and Australia. Fatty liver disease, in its severe form–called non-alcoholic steatohepatitis (NASH)–can lead to cirrhosis and liver cancer and there are currently no other treatments available. Among the Australian test sites are Westmead Hospital (Sydney), The Alfred (Melbourne), and Princess Alexandra Hospital (Brisbane). US sites include the Cleveland Clinic (Ohio), Duke Liver Center (Durham, NC), Baylor St. Luke’s Medical Center (Houston, Tex), and University of Virginia (Charlottesville).

Hadasit, Hadassah’s technology transfer arm, and Immuron, an Australian biopharmaceutical company, worked together to develop the product, being referred to as IMM-124E. The collaborative effort combines Hadassah’s oral immune modulation approach with antibodies produced by Immuron. Immuron has also announced that it is beginning a United States Investor Roadshow, where it will showcase its technology platform and profile to US investment groups. The company reports that its clinical trials “are progressing well” and that “a recent Deutsche Bank review of the NASH market suggests that there is a worldwide market for NASH of between $35-40 billion.” The company further explains that “the high prevalence of Type 2 diabetes and obesity, which leads to NASH and other non-alcoholic fatty liver diseases, boosts the prevalence of NASH and its market growth.”