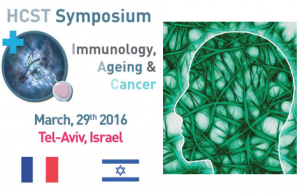 The French-Israeli High Council for Science and Technology (HCST) has chosen “Immunology, cancer and ageing” as a priority research topic for 2017-2018. The Israeli Ministry of Science, Technology and Space, together with the French Embassy in Israel have organized a scientific symposium to be held in Tel Aviv the 29th of March 2016, in Tel Aviv.
It will match with the launching of the HCST call for proposals : three bilateral research projects will benefit from a financial support of up to 80.000€ yearly over a period of 2 years.
This symposium will gather scientists to discuss opportunities for future collaborations between France and Israel in the field of immunological issues in cancer and ageing, in the hope of leading to partnerships between French and Israeli bodies and allow them to apply for the calls for proposals of the HCST and the FIRAD (more information on this below).
Participants will have the opportunity to attend a scientific and industrial symposium, individual meetings, a networking reception, as well as guided tours in well-known Israeli research centers. We expect this symposium to:
– Enable scientists from both countries to meet and encourage them to deliver the latest on this field’s research in France and Israel, in order to highlight prospective fields of scientific research and their possible connexion with industry.
– Enable scientists from both countries to meet and encourage them to build up common projects that could be submitted to the HSCT program and to European funding agencies.

The France-Israel Industrial R&D Cooperation Framework (FIRAD) promotes R&D collaboration between French and Israeli companies interested in jointly developing and commercializing new, innovative products, applications or services. This call is launched within the framework of the Cooperation Agreement signed in 1992 between the two governments. The main objective of this Call is to foster projects with joint participation of companies from the two countries and provide R&D funding to qualifying participants through the national programs managed respectively by the Office of the Chief Scientist (OCS) of the Ministry of Economy in Israel, and by Bpifrance, the French Public Investment Bank, in France.
Every year, interested parties have two submission deadlines to present their joint project proposal, complying with the following guidelines. The project partners should include at least one Israeli and one French commercial company. Laboratories may act as third partners or sub-contractors. The project can deal with any innovation product, process or service with technological content, leading to commercialization and/or industrialization. The project should clearly demonstrate the contribution of the participants from both countries. The projects should have an obvious advantage and added-value resulting from the cooperation between the participants from the two countries. Project participants will apply for national funding in their respective country according to the national rules.

Created in 2003, the French-Israeli High Council for Science and Technology (HCST) aims to provide governmental support and management to cooperation between France and Israel. The HCST is comprised of scientists from both countries and representatives from the Ministry of Science, Technology and Space (MOST) of the State of Israel, as well as the Ministry of Foreign Affairs and the Ministry of Higher Education and Research of France. Every year, the HCST initiates a call for proposals, entitled Maimonides-Israel, on two topical research fields on fundamental and applied sciences (medicine, physics, biology, etc.).

Within the framework of the French-Israeli High Council for Science and Technology, financial support for 6 research projects carried out jointly by scientists from both countries are provided every year. The aim of this program is to support the development of scientific and technological cooperation between French and Israeli researchers and to strengthen the scientific partnership between research groups from both countries by enhancing research cooperation and promoting the exchange of knowledge between Israeli and French scientists. During two years, approximately 40,000 € per year per project are provided by the French ministry of Foreign Affairs and International Development (MAEDI) and the French ministry of National Education, Higher Education and Research (MENESR) of France and up to 40,000€ per year per project are provided by the Ministry of Science, Technology and Space (MOST)

In 2016, a Call for Proposals is anticipated to be issued for joint project proposals in the fields of “Immunology, ageing and cancer” and “Impact of Climate Change”.