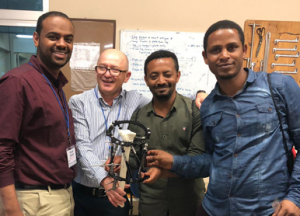 Many children are born in Africa with orthopedic birth defects. Although this is a common problem, there are almost no available solutions. A unique course, given for the first time in Africa by a doctor from Rambam Health Care Campus taught local doctors important treatments and operations—new tools of hope for their patients.

Dozens of doctors from Ethiopia and neighboring countries recently participated in a practical course, the first of its kind, which trained them to fix pediatric orthopedic deformities. The course, held for the first time ever in Africa, was led by Professor Mark Eidelman, director of the Pediatric Orthopedics Unit at Rambam’s Ruth Rappaport Children’s Hospital.

Fifty doctors participated in this unique four-day course. Some of the doctors had already completed their internships, while others were still interns. They attended lectures about different treatment types, attended practical workshops and participated in surgeries. The Black Lion Hospital in Addis Ababa, Ethiopia hosted the course, which was sponsored by CURE International – a non-profit organization that assists children in third-world countries suffering from medical issues, in cooperation with POSNA, the Pediatric Orthopedics Society of North America.

The Ethiopian hospital’s pediatric orthopedic services are directed by two doctors from England. They had relocated to Ethiopia several years ago and dedicated their time to improving treatment conditions for the local population. The two doctors created the course in order to give treatment tools to local medical teams dealing with one of the most common problems in the country. “Against the backdrop of genetic diseases and problems, and especially since there is a great lack of knowledge, infrastructure, and treatment capabilities with regard to pediatric orthopedic deformities. There are many people in Ethiopia with problems that are taken care of in other countries at much earlier stages,” explains Professor Eidelman. “In Israel, like in many other western countries, they know how to diagnose problems on time and treat them in a timely manner. This helps these patients to enjoy a higher quality of life and prevent their conditions from deteriorating. Now, for dozens of local doctors, there are tools and knowledge to help their patients.”

Joining Professor Eidelman on this important mission were two doctors from the United States – one who was Professor Eidelman’s teacher, Professor John Herzenberg, a senior doctor in the field from Baltimore, and Professor Christof Radler, who is also renowned in his field.

According to Professor Eidelman, the main problem in training African doctors is the difficulty of traveling to the United States to receive training there. “The institutions in Baltimore are considered the best in the field in terms of training and teaching, and the city hosts the leading conferences and courses. Unfortunately, most of these doctors don’t manage to secure entry visas for the U.S., and as such, are denied access to this information. This is the reason why we decided to bring the training to them. At the end of a successful course, we decided to continue with this initiative, and in the near future, I’m supposed to return to Ethiopia in order to train additional doctors.”

“Professor Eidelman from Rambam and his distinguished colleagues from the United States exemplify the highest humanitarian values of global citizenship.  Bringing this much-needed training to Ethiopia will in turn offer the promise of a better life to generations of Ethiopian children.  Especially at this season of sharing, is there any greater gift than the hope of a brighter tomorrow,” said Rick Hirschhaut, National Executive Director of American Friends of Rambam Medical Center.