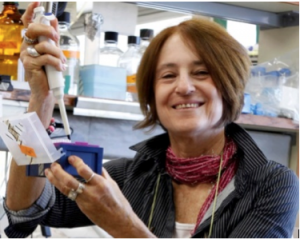 Researchers at the Hebrew university of Jerusalem have created a molecule that could potentially lower diabetic patients’ higher risk of developing dementia or Alzheimer’s disease. Recent studies indicate that high levels of sugar in the blood in diabetics and non-diabetics are a risk factor for the development of dementia, impaired cognition, and a decline of brain function. Diabetics have also been found to have twice the risk of developing Alzheimer’s disease compared to non-diabetics. Now, researchers from the Hebrew University of Jerusalem have found a potential neuro-inflammatory pathway that could be responsible for the increases of diabetics’ risk of Alzheimer’s and dementia. They also reveal a potential treatment to reverse this process.

The research group led by Prof. Daphne Atlas, of the Department of Biological Chemistry in the Alexander Silberman Institute of Life Sciences at the Hebrew University, experimented with diabetic rats to examine the mechanism of action that may be responsible for changes in the brain due to high sugar levels. The researchers found that diabetic rats displayed high activity of enzymes called MAPK kinases, which are involved in facilitating cellular responses to a variety of stimuli, leading to inflammatory activity in brain cells and the early death of cells.

The study shows that the diabetic rats given a daily injection of the sugar-lowering drug rosiglitazone for a month enjoyed a significant decrease in MAPK enzyme activity accompanied by a decrease in the inflammatory processes in the brain. According to the authors, this finding represents the first unequivocal evidence of a functional link between high blood sugar and the activation of this specific inflammatory pathway in the brain.

Using the diabetic rat model, they explored a novel approach that would lower the activation of these enzymes in the brain, and decrease neuronal cell death. In the last few years, Prof. Atlas developed a series of molecules that mimic the action of thioredoxin called thioredoxin-mimetic peptides (TXM), whose role is to protect the cells from early death through activating inflammatory pathways. The TXM peptides were effective in different animal models and were able to prevent the activation of the damaging MAPK kinases. Applied to the diabetic Zucker rats, one of the molecules, TXM-CB3, significantly reduced the activity of these enzymes, and lowered the accelerated brain cell death. These results indicate that the molecule managed to cross the blood-brain barrier and improve the condition of the brain cells, through lowering the inflammatory processes in the rats’ brains, despite the high glucose levels afflicting the rats.

The Hebrew University’s Prof. Atlas said: “This study paves the way for preventive treatment of damages caused by high sugar levels, and for reducing the risk of dementia and Alzheimer’s disease in diabetics or people with elevated blood sugar levels. Following the successful animal testing of the molecule we developed, we hope to explore its potential benefit for treating cognitive and memory impairments caused by diabetes on humans.”

The molecule is protected by a patent registered by Yissum Research Development Company, the technology transfer arm of the Hebrew University.