Weizmann: How to Manipulate the Brain to Control Maternal Behavior in Females and Reduce Aggression in Males 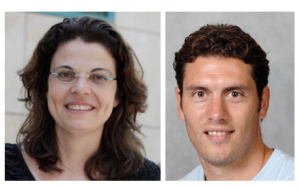 Most female mammals give birth and care for their offspring, while the males often breed with multiple partners and play little role in parenting once the mating is over. Yet researchers have had a hard time pinpointing where, exactly, in the brain these differences between the sexes are located and how they translate into behavior. The extent of “hardwired parental behavior” is hotly disputed.

Dr. Tali Kimchi and her graduate student Niv Scott, in collaboration with Dr. Ofer Yizhar and Dr. Matthias Prigge, a postdoctoral fellow in his lab, all of the Weizmann Institute’s Neurobiology Department, offer new insight into this issue. This research shows that same network of brain cells operates differently in male and female mice.

Female mice, even those that have never had pups, act in ways that can be defined as maternal. They will carry a pup left in the corner of the cage back to the nest, for example, and spend time grooming a newborn. This tendency becomes amplified once those mice turn into mothers. Males, in contrast, are generally aggressive and territorial. They may ignore strange pups or else violently attack them. However, males will become parental for a short period after mating with a female, starting around the birth of their pups.

To investigate how the brain manages parental behavior, the researchers zeroed in on a small structure in  part of the brain known as the hypothalamus, called the anteroventral preventricular nucleus, or AVPV, which is larger in female mice than in males. The team was particularly interested in certain neurons that express a protein known as tyrosine hydroxylase, or TH, which is required for the production of dopamine – a chemical messenger in the brain. They observed that specific TH-containing neurons are more numerous in mothers than in either virgin females or any males. This hinted that these neurons, even though they are shared by both sexes, could drive parental care in females while serving a different function in males.

Using advance genetic and neuro-biochemical tools, the team first increased and then decreased the amount of TH in both adult male and female mice – just in neurons of this particular brain region. Then the researchers recorded how these changes affected the parenting styles of the mice. The team also employed optogenetic technology, in which neurons are activated by light, to precisely manipulate the activity of TH-containing neurons – literally, at the flip of a light switch.

The researchers found they were especially able to trigger maternal actions in female mice – both virgins and mothers – by elevating the TH levels in these neurons. Also, brief optogenetic activation – even a few minutes – was all that was required to get a female to hurry to the corner of the cage to carry a pup back to her nest. Further tests revealed that these manipulations enhanced blood levels of oxytocin – a hormone associated, among other things, with lactation and female reproductive behavior in general. Decreasing the number of TH-containing neurons in females lowered their levels of oxytocin and severely impaired their maternal instincts.

When the scientists used optogenetics to activate TH-containing neurons in male mice, there was no effect on oxytocin levels or pup-caring. However, surprisingly, there was a significant drop in aggressive behaviors toward unfamiliar pups and adult males, both of which they would normally have attacked. Decreasing the number of TH-containing neurons, on the other hand, led to a profound increase in the males’ aggression toward both.

“By controlling the amount and activities of these unique neurons, we were able to manipulate the maternal behavior of the females and the aggression of the males, says Kimchi. “Our results hint that maternal behavior arises from neuronal networks that are largely hard-wired. These are different from those of males, and they are at least partly regulated by the hormone oxytocin.”

These findings may, in the future, provide insight into the ways that male and female brains function when it comes to such conventional gender-related activities as tending to infants, and other innate reproductive and social behaviors. Kimchi hopes that this discovery may ultimately advance our understanding of the biological factors that contribute to mental disorders, which have a social aspect, as well as gender differences. These include postpartum depression, aggression and autism spectrum disorders.