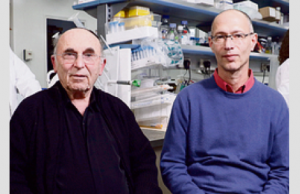 In January 11, 2016, two Hebrew University scientists annouced that they have reached a breakthrough in destroying the HIV virus and have planned to begin clinical trials on human beings within three months. When a person is infected with HIV, the virus enters his/her blood cells and remains dormant. Doctors don’t know when the virus’ awakening process will begin or when it will duplicate itself to other cells.

In the past decades, HIV carriers have been handling the virus through a drug cocktail which delays virus’ processes in a bid to prevent it from spreading. As a result, AIDS has transformed from a fatal epidemic into a chronic disease.

Professor Abraham Loyter and Professor Assaf Friedler of The Hebrew University in Jerusalem began studying the issue, and following some successful research the Zyon Pharmaceutical Company signed an exclusive agreement with Hebrew University to develop the medication.

The two scientists believe that infected cells can be killed without harming the entire body, thereby curing the HIV carrier. This can happen because instead of one copy of the virus’ DNA entering the carrier’s cell, many copies will be inserted, leading to an activation of the cell’s self-destruction mechanisms. The researchers developed peptides, short chains of amino acid monomers, which cause this process.

These peptides, combined with the existing medications, were tested on cultures of human cells with the HIV virus. This led to promising results: Within two weeks of treatment, there was no sign of the virus DNA or infected cells, and the virus was undetectable even two weeks after the end of the treatment. Professor Loyter and Professor Friedler concluded the virus infection can be stopped and the infected cells can be destroyed too.