New alert from OECD about antibiotic resistance and superbugs 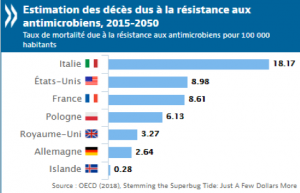 Around 2.4 million people could die in Europe, North America and Australia between
2015-2050 due to superbug infections unless more is done to stem antibiotic resistance. However, three out of four deaths from superbug infections could be averted by spending just USD 2 per person a year on measures as simple as handwashing and more prudent prescription of antibiotics. A short-term investment to stem the superbug tide would save lives and money in the long-run.

A five-pronged assault on antimicrobial resistance — by promoting better hygiene, ending over-prescription of antibiotics, rapid testing for patients to determine whether they have viral or bacterial infections, delays in prescribing antibiotics and mass media campaigns – could counter one of the biggest threats to modern medicine. A package of policies to promote hospital hygiene and policies to reduce over-prescription of antibiotics, including stewardship programmes, mass media campaigns and use of tests in general practice to detect whether an infection is bacterial or viral could save up to 1.6 million lives by 2050 across the 33 countries included in the OECD analysis. The investment in these policies would pay for itself within a year, and end up by saving 4.8 billions of dollars per year.

The challenge of growing resistance 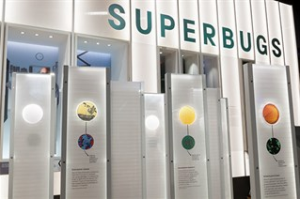 Rising rates of Antimicrobial resistance (AMR) – the ability of bacteria to resist
antimicrobials – will become a growing concern across the OECD and EU28 countries1 unless governments embrace a more robust response to the threat, with babies and the elderly most at risk. Even small cuts in the kitchen, minor surgery or diseases like pneumonia could become life threatening.
AMR is primarily driven by inappropriate use of antimicrobials, including antibiotics, in human health, agriculture and livestock production and by contamination of the environment. The main focus of this report is tackling AMR in the human health sector.
However, actions to promote prudent use of antimicrobials and to prevent the spread of existing infections in humans should be combined with similar actions in other sectors, in a truly “One Health” framework.
Dealing with AMR complications could cost up to USD 3.5 billion a year on average across the 33 countries included in the analysis, unless countries step up their fight against superbugs.
Of the 2.4 million people who could die in Europe, North America and Australia between 2015-2050, according to calculations from the new OECD model, if AMR rates follow the projected trend, southern Europe will be particularly affected. Italy, Greece and Portugal are forecast to top the list of OECD countries with the highest mortality rates from AMR while the United States, Italy and France would have the highest absolute death rates with almost 30 000 AMR deaths a year forecast in the United States alone.

Despite projected reductions in average resistance in Canada, Japan and Mexico, no
single country is projected to reduce resistance for all eight antibiotic-bacterium
combinations. Rather, some countries including Denmark, Iceland, Luxembourg and
Slovenia, could see resistance increase in all eight antibiotic-bacterium combinations.
Average resistance growth seems to be slowing down, but there are serious causes for
concern. Across the OECD, resistance to second and third-line antibiotics – which present the final line of defence to prevent infections – is expected to be 70% higher in 2030, compared to AMR rates in 2005. Across EU28 countries, resistance to third-line
treatments will double in the same period. Resistance to second-line treatments, such as third-generation cephalosporins and fluoroquinolones, is expected to increase in a
majority of countries, leading to greater consumption of carbapenems, and potentially
promoting carbapenem resistance. In some countries, resistance to the last line of
treatment – polymyxins – is already emerging with potentially catastrophic consequences.

Growth in resistance among difficult-to-treat microorganisms, like Enterococci and
Pseudomonas aeruginosa, is also worrisome.

AMR will have an enormous impact on population health and healthcare budgets
While more than two million lives would be at risk due to AMR in Europe, North
America and Australia by 2050, superbugs could also have significant impact on the
quality of people’s lives.
The impact on quality of life, measured through disability-adjusted life years (DALYs),
will be even larger. Southern Europe (Italy, Greece and Portugal in particular) would be
the most affected. In the case of Italy, for example, up to one person in every 205 would lose one year of life in good health due to AMR.
Children and the elderly are most vulnerable. The probability of developing a resistant
infection is significantly higher for children up to 12 months of age and among adults
aged 70 and above. Men are also more likely to develop resistant infections than women.
The unchecked rise of superbugs would also significantly dent healthcare budgets.
Every year between 2015 and 2050, up to USD 3.5 billion (adjusted for differences in
prices across countries, expressed as purchasing power parities or PPPs) is expected to be spent on average between 2015-2050 on AMR-related complications across 33 OECD and EU28 countries, according to calculations from the OECD model.
That corresponds to 10% of health care costs caused by communicable diseases, or to
about USD PPP 2.4 per capita per year on average, with about USD PPP 6.2-6.6 per
capita in Italy and the United States.
Policy solutions exist
The growing resistance to the second and third line of treatment is an extremely worrying scenario, as it means that, de facto, we are exhausting our antibiotics armoury.
However, governments could counter the problem with five main types of affordable
solutions as part of a coherent package. The OECD model was used to identify “best
buys” to tackle AMR in 33 OECD and EU28 countries. The set of policies assessed were aligned with the World Health Organization’s (WHO) global action plan on AMR.
Offering value for money, these “best buys” could significantly diminish the personal and economic cost of AMR.
· The first intervention would be to improve hygiene in healthcare facilities,
including promotion of handwashing and better hospital hygiene.
· The second would be stewardship programmes promoting more prudent use of
antibiotics to end decades of over-prescription.
· The third would be the use of rapid diagnostic tests to detect whether an infection
is bacterial or viral.
· The fourth solution would be delayed prescription.
· The fifth would be public awareness campaigns.
Investment in these measures could pay for themselves within just one year and produce savings of about USD 1.5 for every dollar invested thereafter.
Simple measures, such as promoting hand washing and better hygiene in healthcare – facilities more than halve the risk of death and decrease the health burden of AMR -measured in DALYs – by about 40%, compared to a scenario in which no policy is in
place in the 33 countries included in the study.
Promoting more prudent use of antibiotics through stewardship programmes is also
particularly effective, producing similar results to hygiene improvements. Other
interventions designed to tackle AMR outside hospitals such as delayed prescriptions, the use of rapid diagnostic tests to stop guessing if an infection is viral and bacterial and mass media campaigns would have a more limited impact on health but remain important polices to address a multifaceted and complex phenomenon.
All these interventions are affordable for OECD countries and, in some cases, for
countries at lower level of income.
· Mass media campaigns, delayed prescriptions and improved hand hygiene cost from
as little as USD PPP 0.3 up to USD PPP 2.7 per capita in many OECD countries.
· Interventions that are not particularly expensive, such as improved hand hygiene and
mass media campaigns are also affordable in countries at lower level of income.
· More resource-intense interventions can cost up to a few hundred USD PPP per
hospitalised patient, as in the case of actions to improve hygiene in health facilities.
Delayed prescriptions, improved hand hygiene and most stewardship programmes
generate health care savings that are higher than the implementation cost of the
intervention, according to the OECD model. They are therefore all cost-effective ‘best
buy’ investments to tackle AMR. What is more, if they are implemented together, by
combining policies into a coherent strategy, produce an even bigger impact.
The OECD analysis considered three main packages of interventions.
· The first, for hospitals (including improved hand hygiene, stewardship
programmes and enhanced environmental hygiene in health care settings).
· The second one consisting of community actions (including delayed prescriptions,
mass media campaigns and use of rapid diagnostic tests).
· The third one consists of a mixed intervention package (including stewardship
programmes, enhanced environmental hygiene, mass media campaigns, and use
of rapid diagnostic tests).
These packages would reduce the burden of disease from AMR by, respectively, 85%,
23% and 73%, while producing savings of USD PPP 4.1, 0.9 and 3 per capita per year.
In practice, this would mean millions of people in these countries would avoid AMRrelated
complications and health problems.
Key findings
· In 2015, about 17% of infections in OECD countries were due to bacteria resistant
to antibiotics. But in four countries, more than one-third were resistant to
antibiotics. In some G20 countries, including China, India and the Russian
Federation, more than 40% of infections are due to bacteria resistant to some
antibiotics.
· Around 2.4 million individuals could die in Europe, North America and Australia
between 2015 and 2050 due to AMR.

· Between 2015 and 2050, AMR would cost about USD PPP 3.5 billion per year to the healthcare services of the 33 countries included in the analysis. This would correspond to USD PPP 2.4 per capita or, roughly, about 10% of the healthcare budget devoted to communicable diseases.
· If no effective public health action is put in place, AMR rates will grow further. Resistance to second and third-line antibiotics is forecast to grow the most, with AMR rates in 2030 projected to be 70% higher than in 2005 in OECD countries. In EU28, resistance to third-line antibiotics is forecast to double in the same period.
· A five-pronged assault on antimicrobial resistance — by promoting better hygiene, ending over-prescription of antibiotics, rapid testing for patients to determine whether they have viral or bacterial infections, delays in prescribing antibiotics and mass media campaigns – is vital to stem the superbug tide.
· Policies to promote handwashing, hospital hygiene and stewardship programmes to reduce over-prescription of antibiotics could save between 35 000 to 38 000 lives per year across the 33 countries included in the analysis.
· Mass media campaigns, delayed prescriptions and the use of rapid diagnostic tests also produce a positive health impact, albeit more limited.
· Public health actions to tackle AMR are affordable. Implementing such policies varies from as little as USD PPP 0.3 per capita for mass media campaigns to a few hundred USD PPP per hospitalised patient in the case of enhanced hygiene in healthcare.
· All the assessed interventions are “best buys” to tackle AMR in the assessed countries given their high impact on population health, affordability to implement, and excellent cost-effectiveness ratio. Savings from delayed
prescriptions, improved hand hygiene and, in most cases, from stewardship
programmes exceed the cost of implementation.
· A package comprising hospital interventions; one consisting of community
actions and a mixed intervention package would respectively avert around 1.3 million, 0.4 million and 1.1 million DALYs and 55 000, 14 000, and 47 000 life years saved across the 33 countries included. The hospital-based package would result in an annual average net saving (i.e. after accounting for the implementation cost of each intervention) of USD PPP 4.1 per capita across the 33 included countries. Community-based interventions would also result in an average annual saving of around USD PPP 0.9 per capita across the 33 included countries. The mixed policy approach would cost about USD PPP 2 per capita per year leading to an average net saving of around USD PPP 3 per capita per year.