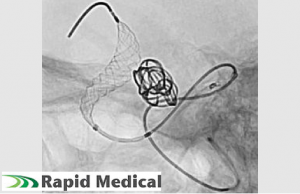 Rapid Medical, a company focused on the development of neurovascular interventional devices, announced that the Comaneci Adjustable Remodeling Mesh has exceeded 500 successfully treated aneurysms worldwide. This milestone comes only two years after Rapid Medical launched the device in Europe.

The Comaneci is the first-ever adjustable, fully-visible remodeling device. It is intended to provide temporary assistance for coil embolization of intracranial aneurysms. It integrates the advantages of existing adjuvant devices without the risk of parent vessel occlusion during coiling procedure or the need for long-term antiplatelet medication in case of permanent stenting.

“With traditional balloon remodeling techniques, preserving constant flow into intracranial arteries is impossible. The availability of a fully-visible device that permits constant flow during the procedure was previously non-existent,” said Prof. Dr. Luca Remonda, Head of Neuroradiology, at Kantonsspital Aarau, Switzerland. “The Comaneci has become a standard tool in our practice and many of our patients have experienced its benefits.”

The Comaneci uses Rapid Medical‘s FlexiBraid technology, a unique and proprietary braiding capability that allows the first fully-visible, controllable device that can be adjusted by the physician to perfectly fit the dimensions of parent vessels and the aneurysm neck.

“We are very pleased with the rapid adoption of the Comaneci device, which is becoming a preferred tool in neurovascular practice,” said Eitan Havis, VP of Sales and Marketing. “We believe the combination of adjustability, visibility and compliance offered by the Comaneci is a critical part in successful aneurysm treatment.”

The Comaneci family of devices are available for sale in Europe and Israel. Rapid Medical plans to launch the Comaneci in additional regions in the coming months.

Rapid Medical is the developer of game-changing devices for endovascular treatments. This includes TIGERTRIEVER, the first-ever controllable, fully-visible retrievable stent, and Pele, a large lumen distal access catheter. TIGERTRIEVER, Comaneci, and Pele are CE marked for use in Europe.