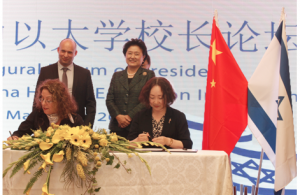 BGU President Prof. Rivka Carmi and JLU Executive Vice Chairman of the University Council Prof. Li Cai sign an agreement to establish a joint innovation center during the conference at the Inbal Hotel in Jerusalem of the Forum of Presidents of Israel-China Higher Education Institutions on Tuesday afternoon while Chinese Vice Premier Liu Yandong and Israeli Education Minister Naftali Bennett look on

Ben-Gurion University of the Negev (BGU), Israel, and Jilin University (JLU), the biggest university in China, signed an agreement Tuesday to establish a joint center for entrepreneurship and innovation. The agreement was signed in the presence of Chinese Vice Premier Liu Yandong and Israeli Education Minister Naftali Bennett. BGU President Prof. Rivka Carmi and JLU Executive Vice Chairman of the University Council Prof. Li Cai signed the agreement in Jerusalem at the Inbal Hotel during the conference of the Forum of Presidents of Israel-China Higher Education Institutions, a new initiative of the Israeli Council for Higher Education.

On Wednesday afternoon, JLU and BGU signed a Memorandum of Understanding to further extend the collaboration into additional fields of interest during a visit to BGU’s Marcus Family Campus in Beer-Sheva. The new joint center will promote academic cooperation in research and teaching and will serve as a platform to encourage connections between Chinese and Israeli businesspeople. The agreement emerged through the cooperation of the universities’ two innovation centers: the Bengis Center for Entrepreneurship and Innovation in the Guilford Glazer Faculty of Business and Management at BGU and the China-Israel Center for Entrepreneurship and Innovation in the Faculty of Economics at JLU. The two centers will lead the activities of the new center as well.

Jilin University is situated in Changchun in Northeast China and is one of China’s ‘Top Ten’ Universities and also its largest university with approximately 67,000 students. “This agreement is another stage in the internationalization of BGU and exemplifies the University’s commitment to academic excellence, international ties, and economic growth,” Prof. Carmi declared.

The evening of May 16, former foreign minister MK Tzipi Livni will be the guest of honor at a gala dinner.

A delegation of 100 academicians and business people are expected from China for the May conference.

About BGU
Ben-Gurion University of the Negev, founded in 1969, aspires to fulfill the vision of Israel’s first Prime Minister, David Ben-Gurion, who believed that Israel’s bright scientific future lay in the development of the Negev, Israel’s vast southern desert. Today, as it approaches its 50th anniversary, the University has realized its mandate to teach, conduct research and drive development in the Negev: close to 20,000 students are enrolled in six faculties at its campuses in Beer-Sheva, Sede Boqer and Eilat.

About JLU
JLU Executive Vice Chairman of the University Council Prof. Li Cai (center) in conversation with BGU’s Bengis Center for Entrepreneurship and Innovation Chairperson and Director Prof. Dafna Schwartz (right) during a visit to  Ben-Gurion University of the Negev in Beer-Sheva on Wednesday.