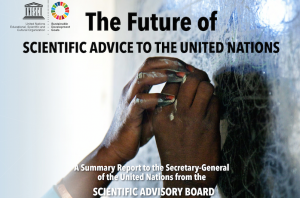 UN Secretary General Ban Ki-moon will meet with his Scientific Advisory Board, together with UNESCO Director General and chair of the Board Irina Bokova, on 18 September 2016 during the 71st session of the United Nations General Assembly. The Board will present a summary report of their recommendations, entitled “The Future of Scientific Advice to the United Nations”, which provides an analysis of priority issues.

The United Nations Scientific Advisory Board considers science central to decision-making for sustainable development. This report is grounded in that view. It summarizes the Board’s work in specific areas, including the role of science; the data revolution; the interface of science, policy, and society; and efforts to reduce inequalities. It outlines the Delphi study identifying grand challenges. The report contains recommendations that could be taken up by the UN Secretary-General, by individual governments, by scientists, and by other stakeholders. It also features recommendations for the effective operation and future role of the UN Scientific Advisory Board itself.

The report will be available on this website in English, French and Spanish shortly after the meeting.

The Scientific Advisory Board of the UN Secretary General seeks to inform the United Nations’ work by providing advice on science, technology and innovation for sustainable development. The Board brings together 25 eminent scientists from all regions of the world and aims to provide a complete picture of scientific needs to face global challenges, taking into consideration natural and social sciences as well as local and indigenous knowledge systems.

To upload the report, send an email to Dan Shepard shepard@un.org