A first! President of India Pranab Mukherjee to arrive in Israel 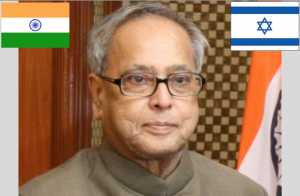 The President of India, H.E. Pranab Mukherjee, will arrive in Israel on Tuesday 13 October 2015 for a three-day state visit to Israel, at the invitation of President of Israel, H.E. Reuven Rivlin. The visit marks an historic political milestone as the first such visit by an Indian president to the State of Israel, and this reflects the continued strengthening of relations between the two countries.

The President of India will receive an official reception at the Israeli President’s Residence, after which the two heads of state will hold a working meeting. Later, President Rivlin will host a state dinner in honor of President Mukherjee’s visit.

Speaking of the visit, President Rivlin said, “The upcoming visit of the President of India, more than being an important milestone in the relationship of the two countries, will serve to deepen the friendship between our states, in the fields of economy, science, medicine, and agriculture. I am looking forward to the meeting, which will represent one of the highlights of the relationship between the Israeli and Indian peoples.”

President Mukherjee’s itinerary will also include a luncheon with Prime Minister Benjamin Netanyahu, as well as meetings with Speaker of the Knesset Yuli Edelstein, and with Chairman of the Opposition Isaac Herzog. Similarly, President Mukherjee is due to deliver an address at a special plenary meeting of the Israeli Knesset.

The visit will conclude with a ceremony at Jerusalem’s Hebrew University, where President Mukherjee will receive an honorary doctorate – marking the ongoing academic cooperation between the two countries.

Israel views with high importance the developing relations with India, and is delighted by the occasion of the first visit of an Indian president to Israel.