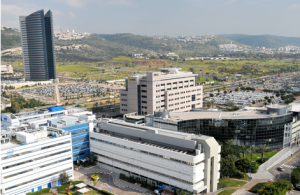 Zvi Roger - Haifa Municipality - The Spokesperson, Publicity and Advertising Division, Matam located at the southern entrance to Haifa, Israel, is the largest and oldest dedicated Hi Tech park in Israel. Next to it, IEC Tower. The buildings in Matam at the front of the picture are the ones of Intel and Elbit Systems.

In the first stage, the Ministry of Economy and Industry will issue hundreds of employment visas for overseas specialists. Subsequently, the plan will be expanded to encompass thousands of work visas for software engineers and other high-tech professionals. Sources in the high-tech sector believe that if the plan is implemented, it will have a major effect on high-tech salaries in Israel, lowering them.