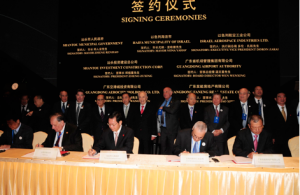 In a remarkable ceremony, Israel Aerospace Industries (IAI) signed a Strategic Framework Agreement to cooperate with the Shantou Municipal Government of China, the Guangdong Airport Authority (GAA) and other Chinese partners, to develop and expand the local civil aviation industry as a lever of economic growth in the municipality.
IAI is a world leader in the development, manufacturing, certification, and marketing of civil aircraft. In addition, IAI has vast experience in aero-structures, aero-assemblies, aircraft maintenance and more. Based on IAI’s tremendous experience as a center of excellence in the aforementioned civil aviation topics, the Company will evaluate, and provide recommendations to the local Government of Shantou on several initiatives: parts production and aero-assembly lines facility, aviation technical education and professional training facility, civil aviation development center and more.

The agreements were signed in the presence of Science Minister Mr. Ofir Akunis who signed a joint research agreement with his Chinese counterpart, Mr. Shimon Peres Israel’s ninth President, former Science Minister Mr. Yaakov Perry, the Mayor of the city of Haifa Mr. Yona Yahav, and the Technion President Mr. Peretz Lavie. The Chinese counterparts included, among others, the Governor of Guangdong Province Mr. Zhu Xiaodan, the Mayor of Shantou Mr. Zheng Renhao, and Sir Li Ka- Shing, a Hong-Kong business investor, and a powerful figure in Asia.

Mr. Gadi Cohen, head of IAI’s Civil Aviation Group, who led this initiative with the Chinese partners, said: “the cooperation agreement with the City of Shantou is part of IAI’s strategy to locate additional civil aviation growth drivers worldwide and particularly in China. This is another international validation of IAI’s capabilities in this area. We are confident that these and other initiatives will open new business opportunities for us and our Chinese partners.”

Shantou city was one of the first group of four cities as special economic zone set up in China in 1981, and has been in fast speed road for its economic development in the recent years. Shantou is famous for its oversea Chinese business investment. Shantou Municipal Government is interested in developing and expanding the aviation industry in Shantou, Guangdong, China.