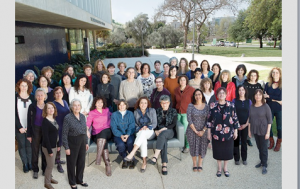 Since 2007, 96 awards, worth $40,000 apiece, have been awarded by the Weizmann Institute of Science to young women from all over Israel who are headed for a career in science. This year, another 11 young women who have excelled in their doctoral studies in science in a number of higher research institutions in Israel were awarded grants from a unique program of the Weizmann Institute of Science. The program is designed to advance women in the fields of natural sciences – physics, chemistry and the life sciences – and the exact sciences – mathematics and computers science. The aim of the program is to close the significant gap that still exists between men and women in high academic ranks.

The program, which was established 2007, assists young Israeli women scientists to overcome one of the main obstacles to a career in scientific research: taking up a postdoctoral position abroad. The grants given through the Weizmann Institute enable outstanding women PhD graduates  to accept offers from labs in other countries, giving them an incentive (financially, but also socially and professionally), and especially helping those with partners and/or children for whom a move entails an added strain. The program seeks to encourage women who see their future career in academic scientific research in Israel, and ultimately hopes to cultivate a cadre of women leaders in Israeli science.