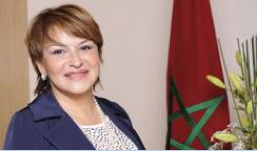 Thursday, June 9th, 2016, in Paris, AJE Association of Environmental Journalists, organized an exceptional meeting, “From COP21 to COP22″, with Mrs. Hakima El Haite, Environment Minister of the Kingdom of Morocco, special correspondent for the climate. The meeting, which will bring together about 40 journalists is organized by AJE, whose president is Esther Amar, founder and director of Israel Science Info.
Appointed minister in 2013, Mrs. Hakima El Haite participated in COP Warsaw, Lima and Paris. As the organizer of the COP22 (22th session of the Conference of the Parties climate) to be held from 7 to 18 November 2016 in Marrakech, Morocco, it calls for a rapid implementation of Paris agreement. As microbiologist, she holds a doctorate in engineering of environment from the National School of Mines of Saint-Etienne, Hakima El Haite created in 1994 Eauglobe, engineering company and work environment.

This meeting is organized and hosted by Valéry Laramée of Tannenberg, active member of AJE, former president of the AJE.