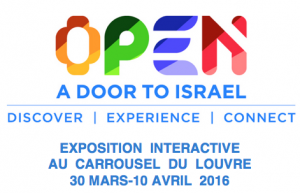 From Wednesday, March 30th to Sunday, April 10th, 2016, from 9:00 to 20:00, B’nai B’rith France invites you to the exhibition “Open a door to Israel,” about Israel and innovation. This interactive and connected exhibition will allow visitors to discover a country, a culture and a people, by simply opening the doors. Ido Bromberg, director of public relations at the Israeli Embassy in France said: “this exhibition has been presented to the Vittoriano museum in Rome and Moscow and will then be in other capitals.” “Open a Door to Israel,” an exhibit comprised of nine huge door-shaped screens that visitors can open to learn about different aspects of Israel, debuted at the Tel Aviv Port in December and will begin a worldwide tour this month at the Vitoriano Museum in Rome. The exhibit will continue on to Germany, France, Russia, South Korea, Japan, China and the United States.

Israel’s Ministry of Foreign Affairs and Ministry for Strategic Affairs and Public Diplomacy collaborated on “Open a Door to Israel,” which offers peeks into the country’s heritage, music scene, family life, education system and innovation. It also includes a multimedia show on Israeli creativity, synchronized with robotic screening technology. “Our goal is to present Israel’s vibrant society and core values in a personal and relatable way to audiences around the world,” said Arthur Koll, deputy director general for public affairs at the Foreign Affairs Ministry.

Open a door to Israel ‘show in Warsaw until 20 March

Organized under the auspices of the Israeli Ministries of Foreign Affairs and for Strategic Affairs, it is built around nine doors that tell the story of Israel.

The curator of the exhibition, Zavi Apfelbaum of the Israeli Ministry of Foreign Affairs has told Polish Radio that each door introduces visitors to a different aspect of life in Israel.

“We can see a family at a birthday party, having a good time together, like every Italian or Polish family. There is also a Druze family enjoying their afternoon tea. Family ties are very very important for Israeli people, as indeed for most people around the world”, he said.

The exhibition gives insights into many aspects of the Israeli scene – the country’s heritage, its culture, music, education, innovative technologies and the city of Jerusalem, with its sacred places for Jews and Christians.

The exhibition is part of a promotional campaign by the Israeli government. It was previously shown in Rome, where it attracted over 30,000 people. From Warsaw, it will go to Paris, Moscow, Rio de Janeiro during the Summer Games there, and then to China and the United States.

It remains on show in Warsaw at the Soho Factory (Praga district) until 20 March.