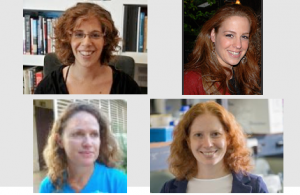 Four women, Shira Dvir Gvirsman (Hebrew U., Tel Aviv University), Yifat Merbl (Weizmann), Tali Kristal (Haifa University) and Reut Shalgi (Technion), are among the 24 israeli laureates of ERC grants. The European Research Council (ERC) has announced the awarding of its Starting Grants to 291 early-career researchers. The funding, worth in total €429 million and up to €1.5 million per grant, will enable them to set up their own research teams and pursue ground-breaking ideas. The grants are awarded under the ‘excellent science’ pillar of Horizon 2020, the EU’s research and innovation programme.  On this occasion, Carlos Moedas, European Commissioner for Research, Science and Innovation, said: “We need to keep our most talented researchers in Europe while attracting the new and diverse perspectives of top researchers from elsewhere in the world. These grants ensure many of the world’s most exciting ideas are developed right here: giving researchers and scientists the freedom and security to pursue their careers and ambitions on our continent.”
The President of the ERC, Professor Jean-Pierre Bourguignon, said: “With the granting of two thirds of its support to younger researchers, the ERC has shown its strong commitment to backing up-and-coming talent. The latest funding round adds to the many Starting Grant holders already supported across Europe, allowing them to gain early independence and to go after their most creative ideas without pre-set themes. Europe needs to encourage such creativity and risky, cutting-edge research. This year, the number of grantees based in Central and Eastern Europe doubled. Although still a very low figure, I hope this will be the basis for a sustained positive trend.”
The new grantees will work on a wide range of topics, such as exploring Earth’s past climates, investigating neglected tropical diseases, and studying how diplomacy transforms under the pressure of new media. The funded research covers all disciplines: physical sciences and engineering, life sciences, and social science and humanities. See more examples of funded research.
ERC grants are awarded to researchers of any nationality based in, or willing to move to, Europe. In this competition, grantees of 38 nationalities received the funding. The new ERC projects will be hosted in 23 countries across Europe, with the United Kingdom (48), Germany (47), Netherlands (32) and France (29) as top locations. The number of grantees based in countries covered by the ERC initiative to widen participation, mainly in Central and Eastern Europe, increased compared with the past few years. Malta will host its first ERC grantee. See more statistics of this competition.
These grants will also enable the selected scientists to build their own research teams, engaging an estimated 1,000 postdocs and PhD students as ERC team members. The ERC thereby also contributes to supporting a new generation of top researchers in Europe.
List of all selected researchers by country of host institution (alphabetical order within each country group)
Lists of selected researchers by domain (in alphabetical order): Physical Sciences and Engineering; Life Sciences; Social Sciences and Humanities
ERC Starting Grants are awarded to researchers of any nationality with 2-7 years of experience since completion of PhD (or equivalent degree) and a scientific track record showing great promise. Research must be conducted in a public or private research organisation located in one of the EU Member States or Associated Countries. The funding (maximum €1.5 million per grant) is provided over up to five years. Two thirds of the ERC budget is earmarked for the Starting Grant and Consolidator Grant schemes, and calls for proposals are published once a year.
The European Research Council, set up by the European Union in 2007, is the first European funding organisation for excellent frontier research. Every year, it selects and funds the very best, creative researchers of any nationality and age, to run projects based in Europe. The ERC also strives to attract top researchers from anywhere in the world to come to Europe. To date, the ERC has funded more than 5,000 top researchers at various stages of their careers.
The ERC is led by an independent governing body, the Scientific Council, and, since January 2014, the ERC President is Professor Jean-Pierre Bourguignon. The ERC has a budget of over €13 billion for the years 2014-2020 and is part of the EU research and innovation programme, Horizon 2020, for which European Commissioner for Research, Innovation and Science Carlos Moedas is responsible.