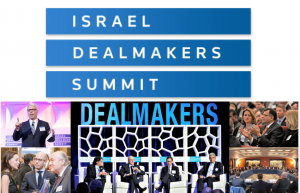 The Division for Foreign Investments and Industrial Cooperation at the Israeli Ministry of Economy is leading a delegation with representatives of 13 Israeli companies to the Israel Dealmakers Summit in New York City, which begins today. The summit is an annual gathering focusing on Israeli innovation organized by leading international financial advisory firm Landmark Ventures and will include top investors from around the world, government officials and more than 1,000 senior executives from international and Israeli hi-tech firms.

This year, the summit is focusing on technology trends leading global growth in key sectors: digital media, cleantech, Internet infrastructure, medical equipment, big data, cloud computing and more. Senior officials from mega-companies including Shell, Siemens, BMW and others are participating, as well as representatives of dozens of Israeli companies specializing in water, energy, big data and new media. Included among the Israeli companies are: Ener-T, Brenmiller Energy, Woosh Water Systems and WaterWays Solutions. Israel’s Chief Scientist in the Ministry of Economy, Avi Hasson, is a keynote speaker at the summit.

Ziva Eger, Director of the Foreign Investments and Industrial Cooperation Division at the Israeli Ministry of Economy, said: “Promoting foreign investments in Israel is one of the key goals of the Ministry of Economy and the Government of Israel; it is a lever of growth for the economy and for international cooperation. The Division for Foreign Investments and Industrial Cooperation initiates, promotes and participates in many investment events in Israel and around the world. We are proud to be part of the Israel Dealmakers Summit for the third time. About 250 Israeli startups and leading investors are taking part in the summit along with about a thousand companies and organizations from the US. This is an excellent platform for business networking and for promoting foreign investments in Israel. During the event, we will hold a Smart Energy seminar and participate in several panels focusing on new investment models in Israel. We have also organized a large number of business meetings at the event. We expect that this year, similar to previous years, we will see real results coming out of the meetings that will take place at the summit.”

Israel’s Economic Minister to North AmericaNili Shalev said: “This is the largest event of its kind in the US focusing on cooperation and bilateral investments between Israel and the US. The summit will feature many companies that can expand their activities in Israel. This is the second year that the event will be taking place in New York. Last year, the Ministry of Economy’s involvement led to ongoing dialogue with key companies, which later sent representatives to Israel to examine potential investments. In addition, the ministry’s participation generated opportunities for Israeli companies to be exposed to international investors and to promote cooperation in their respective fields.”

Among the Israeli companies in the delegation: