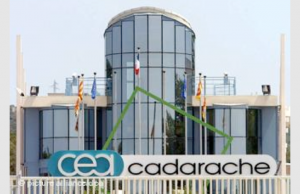 The scientific collaboration focuses on feasibility analysis of representative configurations of core degradation situation during severe accidents in nuclear reactors, and includes a Ph.D research study conducted and financed by both parties. This study is part of CEA’s feasibility studies of a new experimental critical facility called ZEPHYR (Zero power Experimental PHYsics Reactor), with a target date for start-up at the beginning of the next decade, in the Cadarache Research Centre.

For that purpose, a Ph.D student from BGU will be hosted by CEA in Cadarache Research Center laboratories for a period of three years as a visiting scientist. The Program, which started on 1st March 2015, is conducted Program ManagersDr. Erez Gilad from BGU’s Unit of Nuclear Engineering and Dr. Patrick Blaise of CEA.

The CEA is strongly involved in core physics R&D field using Zero Power Reactors (ZPR) for experimental qualification, and is launching a new project called ZEPHYR as a future modern ZPR for experimental physics. Ben-Gurion University and the Unit of Nuclear Engineering specifically, are highly interested in developing its expertise and research capabilities in core physics and to participate in studies related to ZEPHYR. Both parties agreed to share competences and to train future scientists in the field of the safe use of nuclear energy.