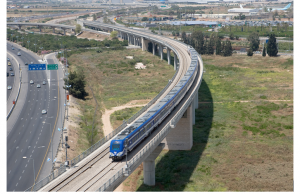 Israel Railways carried 48.5 million passengers in 2014, a 7.5% increase, compared with 45.1 million passengers in 2013, according to Israel Railways yearly summary. Israel Railways attributed its growth to better service, new routes, more frequent routes, and more stringent adherence to timetables. In mid-June 2014, a new timetable completely changing Israel Railways’ method of operation from the past 16 years was issued. The new timetable included dozens more trains, a change in operating hours, and consistency in hours. In November-December, the first representative months after the timetable was implemented (after Operation Protective Edge, the school vacation, and the High Holy Days), a new daily record of 196,000 passengers was set.

Israel Railways has chosen HaCon’s Train Planning System TPS for its train planning and capacity management, including all schedules and route inquiries for passenger and freight traffic.  In addition, HAFAS components for timetable publishing are part of the delivery.

Israel Railways needed a tailored and integrated planning tool for both yearly timetables and future infrastructure and timetables up to 2020 and beyond. HaCon delivered a flexible and configurable solution that guarantees a seamless interaction with third-party systems and a perfect adaptation to the existing IT infrastructure.

Facing a constant rise in traffic demands, Israel Railways director of the long-term planning department Yosef Navon said: “We aim to reach 70 million passengers in 2020, add electrification, and increase the length of track from the current 1,100 kilometers to 1,700 at the same time. We are happy to have a strong partner and software expert like HaCon at our side to meet these challenges at the best possible rate.”

Israel Railways Corporation Ltd. was established in 2003 as an independent government-owned corporation. In addition to freight and passenger transport services, their activities include the development, management, maintenance and operation of railway infrastructure in Israel. A comprehensive development plan has turned Israel Railways into the most rapidly growing transportation company and the largest infrastructure provider in Israel. With 2,370 employees, its annual turnover is about 1.4 billion NIS (approx. 310 million EUR) in routine operation and over 3 billion NIS (approx. 660 million EUR) in development activities.