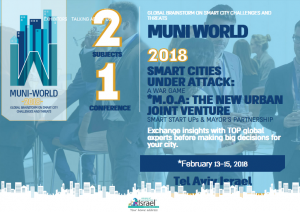 The annual event of the Federation of Local Authorities in Israel [FLAI] is the largest of its kind in Israel’s local authorities. The event is attended by some 6,000 senior director managers of 257 local authorities, and some 2,000 executives from municipal companies and corporations. The strength of the convention lies in the collaborations formed between its participants and their impact on the daily lives of millions of citizens. The 2017 convention was attended by more than 6,000 participants in over 25 different conferences, sessions and discussions, headed by 160 speakers. This year marks Israel’s 70th anniversary, and the 80th anniversary of the Federation of Local Authorities in Israel. This is also a year of municipal elections, making the event even more significant – bigger, more comprehensive and more impactful.

Registered international participants of the MUNI WORLD Global Brainstorm are granted
full access to all the events of MUNI EXPO 2018.

MUNI EXPO EXHIBITION
A two-day exhibition and meeting grounds for Israeli and international service providers will take place in a 6,000 m2 pavilion at the Tel Aviv Convention Center. Befitting the ‘Start-Up Nation’, the expo will showcase 140 startup companies – including ONH, Exodus, Urban Digital, Securenet, Genio, Zen City, Mifram Security – and municipally owned accelerators (MOA), pertaining to developing urban technologies. Their goal is to provide smart solutions to the variety of challenges faced by local authorities and municipalities, including cyber security threats and other disruptions.