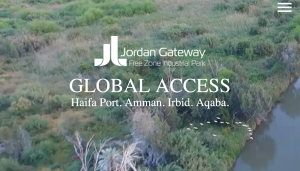 The Government, today (Sunday, 31 July 2022), approved the proposal of Prime Minister Yair Lapid and Regional Cooperation Minister Esawi Frej to accelerate the implementation of the ‘Jordan Gateway’ project – the joint industrial zone between the State of Israel and the Hashemite Kingdom of Jordan. In the framework of the project – which was first proposed during talks on the 1994 peace agreement – it has been decided to advance the construction and operation of the ‘Jordan Gateway’ park in order to enhance cooperation with the Kingdom of Jordan.

Staff work on preparing the decision and the operation model for the terminal were led by the Prime Minister’s Office and the Regional Cooperation Ministry, in conjunction with the Transportation and Road Safety Ministry, the Ministry of Foreign Affairs, the Economy and Industry Ministry and the Airports Authority.

In recent years, the Regional Cooperation Ministry, in conjunction with the Emek Hamaayanot Regional Council, has advanced the project to develop the park, and worked to remove impediments and update the relevant planning and legal issues, including the construction of a bridge between Israel and Jordan to serve as a crossing between the park on its Jordanian side and its Israeli counterpart, the building of which was completed some time ago.

Prime Minister Lapid: “Twenty-eight years since the peace agreement with Jordan, we are taking the good neighborly relations between our two countries another step forward. This is a breakthrough that will contribute greatly to developing and strengthening the region. The final details regarding this initiative were addressed last week during my visit with King Abdullah II in Amman.

This is an initiative that will increase employment in both countries, advance our economic and diplomatic relations, and enhance the peace and friendship between our two countries. I thank Transportation and Road Safety Minister Merav Michaeli for mobilizing all of the relevant officials for this process.

This is a joint industrial zone on the border. It will allow Israeli and Jordanian entrepreneurs and businesspeople to communicate directly. It will produce joint initiatives in trade, technology and local industry.”

This is part of the major progress that we have carried out in strengthening relations with Jordan in the past year. We started with the agreement to export water in exchange for solar energy and now have this decision which takes the vision of the civil peace, not just between the countries but also between the peoples, an additional step further. The peace between us is not a peace devoid of economic and civil cooperation that enables the citizens of both countries to enjoy its fruits.

Advancing the project will facilitate the strengthening of economic cooperation with the Kingdom and contribute greatly to the economies of both countries and of the region as a whole.”

Transportation and Road Safety Minister Michaeli: “I welcome every action to improve relations with the Kingdom of Jordan. Jordan is a strategic partner and is of decisive importance for the stability of the entire region.

I am committed to doing whatever proves necessary to establish our relations with the Kingdom and assist in advancing the goals it has in common with the State of Israel.”

Following are the main points of the decision:

1. Advancing operation of the ‘Jordan Gateway’ Park Terminal for the crossing of pedestrians, which will also serve as a convenient crossing for entrepreneurs interested in the joint initiative and in the industrial zone on the Jordanian side.

2. According to the detailed outline of the decision, subject to budgetary agreements and the approval of the Knesset Economics Committee, the Airports Authority will build and operate the Jordan Gateway Park Terminal.

3. The terminal will include a facility for hosting businesspeople and guests who will arrive from the Jordanian side for business purposes.

4. The immediate construction of an entrance facility and the necessary structures for operating the park will be evaluated while allocating resources for completion.

5. An outline will be formulated on developing the initiative on the Israeli side in the intermediate- and long-term, which will be evaluated following completion of the first stage.

The project will be advanced, developed and operated in coordination and conjunction with the Kingdom of Jordan and with mutual agreement on the goals of the project and aspects of its operation.