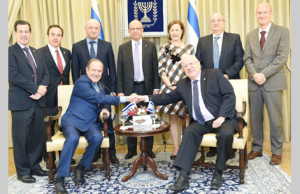 Media tycoon Mortimer Zuckerman has pledged $100 million for the creation of a program to foster US-Israel collaboration in the sciences, The Times of Israel reported Tuesday. The Zuckerman STEM Leadership Program was announced Monday at an event attended by New York Governor Andrew Cuomo and several Nobel laureates.

The program is set to launch for the 2016-2017 academic year, and is designed to promote cooperation between “highest-achieving” American post-doctoral researchers and graduate students and “leading researchers” at Hebrew University, the Technion, Tel Aviv University and the Weizmann Institute of Science, according to a news release Monday.

Zuckerman is a former chairman of the Conference of Presidents of Major American Jewish Organizations. His foundation has supported an array of Jewish, medical and scientific institutions. His net worth is estimated by Forbes magazine at $2.5 billion.

“At a time when collaboration is essential to advanced scientific research, this program gives the next generations of leading American and Israeli academics the ability to work together on cutting edge research in ways that stand to benefit their fields for years to come,” Zuckerman said in a statement. “The result will help transform not just the work of the scholars involved, but the way the United States and Israel approach collaboration and cooperation across the sciences.”

Cuomo said in a statement: “New York and Israel share a deep and unparalleled connection – and the Zuckerman Scholars Program is a prime example of how we can keep that relationship strong today and in the future. By helping some of America’s best and brightest students work and learn alongside leading researchers in Israel, this program gives us a new model for cooperation and partnership that will ultimately better society as a whole.”

Zuckerman’s foundation has committed to supporting the program over the next 20 years, with plans to arrange its continuity “in perpetuity”.