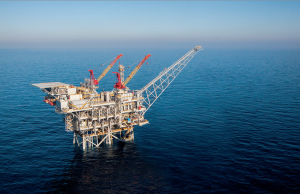 Israel and Egypt signed a contract for the export of natural gas from Tamar project (Israel) to Dolphinus Holdings Limited (Egypt). The volume of natural gas that will be exported is expected to be based on the volume of surplus gas available, on an interruptible basis, over a period of 7 years. Tamar Partners will offer to supply Dolphinus minimum cumulative volume of 5 BCM (billion cubic meters) for the first 3 years of the contract, subject to the daily limit of up to 250,000 MMBtu per day and to supply limitations of Israel Gas Lines Ltd. (“IGL”).

Dolphinus will be responsible for transporting the gas from Ashkelon to Egypt via the existing gas pipeline operated by the East Mediterranean Gas Company (“EMG Pipeline”).

The price of gas is similar to the prices set in other contracts for the export of gas from Israel and is essentially based on linkage to price per barrel of Brent oil and includes a minimum price.

The contract also provides that the Tamar Partners will have first refusal rights over any volume of natural gas that the Buyer will request to import from Israel to Egypt via the EMG Pipeline, and the Tamar Partners will not sell and pipe additional volumes of natural gas from the Tamar Project to Egypt via the EMG Pipeline without the consent of Dolphinus, all in accordance with the terms set in the contract.

The contract includes several preconditions, mainly obtaining the required regulatory authorizations from the authorities in Israel (including an export permit), signing of a transporting agreement between the Tamar Partners and IGL, obtaining the required regulatory approvals from the authorities in Egypt and signing of a transporting agreement between Dolphinus and EMG, enabling the gas to be piped to Egypt via the EMG pipeline.

The Tamar Partners intend acting to obtain an export permit for the volumes that will be sold to the Buyer, under the quota of natural gas permitted for export to neighboring countries as prescribed in Government Resolution No. 442 of June 23, 2013.

To the best of the Partnerships’ knowledge, the Buyer represents a consortium of major Egyptian non-government industrial and commercial gas consumers, gas distributors and entrepreneurs, headed by Dr. Alla Arfe.

The Tamar Partners estimate that the cumulative revenues from the sale of the minimum cumulative volume to Dolphinus (compared with 100% of the Tamar Project) could amount to USD 1.2 billion, based on Dolphinus consuming the minimum cumulative volume and on the Tamar Partners’ estimate regarding the price of natural gas during the term of the contract. It is hereby clarified that the actual revenue will be derived from a range of factors, including the actual volume of gas that will be purchased by Dolphinus and the Brent price at time of sale.

Partners in the Tamar Project and the rate of their holdings are as follows:

About The Delek Group

The Delek Group (TASE: DLEKG, OTCQX: DGRLY), Israel’s dominant integrated energy company, is the pioneering leader of the natural gas exploration and production activities that are transforming the Eastern Mediterranean’s Levant Basin into one of the energy industry’s most promising emerging regions. Having discovered Tamar and Leviathan, two of the world’s largest natural gas finds since 2000, Delek and its partners are now developing a balanced, world-class portfolio of exploration, development and production assets with total gross natural gas resources discovered since 2009 of approximately 40 TCF. In addition, Delek Group has a number of assets in downstream energy, water desalination, and in the finance sector.