Israel: A Genetic Oddity May Give Octopuses and Squids Their Smarts 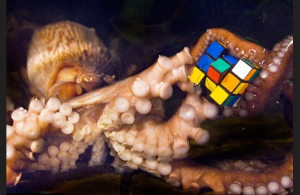 Coleoid cephalopods, a group encompassing octopuses, squid and cuttlefish, are the most intelligent invertebrates: Octopuses can open jars, squid communicate with their own Morse code and cuttlefish start learning to identify prey when they’re just embryos.

In fact, coleoids are the only “animal lineage that has really achieved behavioral sophistication” other than vertebrates, said Joshua Rosenthal, a senior scientist at the Marine Biological Laboratory in Woods Hole, Mass. This sophistication could be related to a quirk in how their genes work, according to new research from Dr. Rosenthal and Eli Eisenberg, a biophysicist at Tel Aviv University.

In the journal Cell on Thursday, the scientists reported that octopuses, squid and cuttlefish make extensive use of RNA editing, a genetic process thought to have little functional significance in most other animals, to diversify proteins in their nervous system. And natural selection seems to have favored RNA editing in coleoids, even though it potentially slows the DNA-based evolution that typically helps organisms acquire beneficial adaptations over time.

Conventional wisdom says that RNA acts as a messenger, passing instructions from DNA to protein builders in a cell.

But sometimes, enzymes swap out some letters — the ACGU you might have learned about in school — in the RNA’s code for others. When that happens, modified RNA can create proteins that weren’t originally encoded in the DNA, allowing an organism to add new riffs to its base genetic blueprint.

This RNA editing seemed to be happening more in coleoids, so Dr. Eisenberg, Dr. Rosenthal and Noa Liscovitch-Brauer, a postdoctoral scholar at Tel Aviv University, set out to quantify it by looking for disagreements in the DNA and RNA sequences of two octopus, one squid and one cuttlefish species.

They found that coleoids have tens of thousands of so-called recoding sites, where RNA editing results in a protein different from what was initially encoded by DNA. When they applied the same methods to two less sophisticated mollusks — a nautilus and a sea slug — they found that RNA editing levels were orders of magnitude lower.

Next, the researchers compared RNA recoding sites between the octopuses, squid and cuttlefish species and found that they shared tens of thousands of these sites to varying degrees. By comparison, humans and mice share only about 40 recoding sites, even though they are hundreds of millions of years closer in evolution than octopuses and squids.

“Evolutionarily, that’s a big deal,” said Jin Billy Li, an assistant professor of genetics at Stanford, who was not involved in this study. The findings suggest that the editing sites are very important, he added.

Conserving RNA editing sites may have come with an evolutionary trade-off, however. When the researchers looked at the coleoids’ genes, they found that DNA mutations were markedly depleted around recoding sites to help preserve them. The result is a significant portion of the genome “that can’t really evolve fast,” Dr. Rosenthal said.

Slower evolution is a “big price to pay,” Dr. Eisenberg said, because DNA mutations are usually the source of new adaptive traits. But it also suggests the greater ability to edit RNA “must be worth it” in terms of natural selection, he said.

He and Dr. Rosenthal found that RNA editing is enriched in coleoids’ nervous tissues, so they suspect it contributes to these animals’ behavioral complexity, possibly by allowing for dynamic control over proteins in response to different environmental conditions or tasks. Previously, Dr. Rosenthal showed that RNA editing might help octopuses rapidly adapt to temperature changes.

Other organisms use all sorts of different methods to modify their RNA, but the possibility that coleoids use extensive RNA editing to flexibly manipulate their nervous system is “extraordinary,” said Kazuko Nishikura, a professor at the Wistar Institute, a nonprofit biomedical research institute in Philadelphia, who was not involved in the study.

“We may learn a lot from squid and octopus brains,” she said.