IsraAid and Tsahal respond to earthquake in Nepal 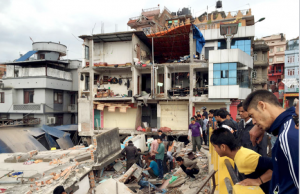 Foreign Minister Avigdor Liberman spoke with Israel Ambassador to Nepal, Yaron Meir, and received from him an update on the situation there following the severe earthquake. FM Liberman instructed the Ministry to reinforce the embassy staff in Kathmandu as soon as conditions permit. Israel will send planes to evacuate Israeli from Nepal, and will extend all possible aid to Nepal.

On Saturday evening, 25 April 2015, Prime Minister Benjamin Netanyahu held an assessment of the situation, via telephone, with Foreign Minister Avigdor Liberman and Defense Minister Moshe Yaalon. It was agreed to dispatch – as soon as possible – a rescue delegation including medical aid. The delegation will land near the affected zone and make its preparations until it becomes possible to land in Nepal. Israelis in the affected zone will receive the means necessary to return to Israel.

President Reuven Rivlin said: “Our thoughts and hearts go out to the people of Nepal dealing with this awful disaster, and with our loved ones who are in distress. The State of Israel is reaching out to help the search and rescue of the many victims.”

IsraAID‘s disaster response team is also en route to affected areas in Nepal. Its efforts will focus on  relief, including distribution of food and non-food items, child protection and medical aid. IsraAID is  coordinating its efforts with the Israeli government and IDF, as well as with the UN and other aid agencies.