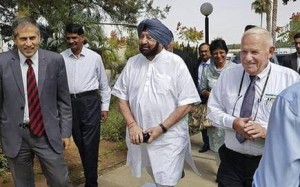 Punjab Chief Minister Amarinder Singh during a visit to the NaanDan Jain Irrigation facility to witness latest technology deployed in precision farming and horticulture, in Israel, on Oct 22, 2018.

The Punjab government has signed four MoUs with Israeli institutions to address issues of farmers and depleting groundwater level in the state.

The memorandums of understandings (MoUs) were signed here in the presence of Punjab Chief Minister Amarinder Singh Tuesday, the second day of his five-day visit to the Jewish nation. He had arrived on Sunday evening.

The MoUs will help boost cooperation between Punjab and Israel in areas such as water conservation as well as agricultural research and education.

The agreements will “help Punjab secure much needed technical expertise and know-how for strengthening its water management systems and improving its agricultural research and learning”, Chief Minister Singh said.

To formulate a water conservation and management plan in Punjab, an MoU was signed between the Punjab Water Resources Management and Israel’s Mekorot Development and Enterprise Ltd.

The agreement for water conservation and management acknowledges that Punjab has a limited availability of surface water because of which groundwater has become a major source of irrigation in the state.

Currently, nearly 73 per cent of water requirements for irrigation are being met through groundwater, the MoU noted.

“Due to multiple cropping and large-scale cultivation of paddy there has been intensive groundwater extraction in the last five decades.

“This has created a situation in which large parts of Punjab have already become water stressed due to over exploitation of ground water resources,” it said.

The water quality is also being affected by untreated or inadequately treated industrial effluent and sewage flowing into natural streams and rivers, the MoU said .

“In some of the areas of the state, particularly in southwest Punjab, ground water is saline and is above the root zone and has made the area unfit for agriculture or for any other use”, it added.

The MoU has assigned Mekorot to formulate a comprehensive, viable, cost effective and efficient water conservation and management plan. This was done as part of an ongoing process of cooperation between India and Israel in the field of water resource management, it said.

Israeli experts with experience in conservation and management of water resources will be helping in formulating the plan.

The two sides will be holding mutual discussions to decide on the details and scope of the water conservation and management plan, and other deliverables, including recommendations regarding use of appropriate technology and detailed project reports.

The MoU said a detailed agreement for preparation of the plan evolved within two months.

The activities to fulfil the MoU will be monitored by a joint working group, comprising an equal number of members from each side. It will be formed within three weeks, it said.

In the MoUs related to the agriculture sector, the PAU has agreed with all the three leading Israeli institutions to collaborate on cooperative research and to hold joint academic seminars in agricultural sciences, pursue faculty and student exchange programmes and cooperate in exchange of scholarship plans of mutual interest.

Details of the arrangements are to be discussed in future deliberations.

The Galilee International Management Institute also agreed with PAU on training of 200 scientists and extension workers.