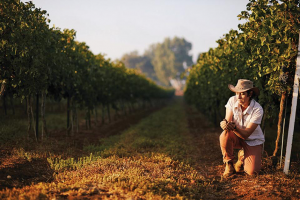 The Woman Who Started A Viticulture Revolution In Israel

Michal Akerman is an Israeli agronomist and viticulturalist who had worked several harvests in vineyards around the world before she headed off to university many years ago. Since her family is originally from Peru, the idea of going to South America was natural for her as she spoke Spanish and it was a chance to visit her grandparents. Since she wanted to travel beyond Peru she needed money and she found herself working in the vineyards of Chile and then South Africa and Cyprus. She would eventually end up pursuing degrees in agronomy and viticulture in Israel and eventually found herself in the middle of a PhD program for viticulture. She is considered the first, official viticulturist in Israel and she has been a pioneer in bringing focus to the importance of sense of place and the health of the vines. But she is currently on a path to truly bringing a viticulture revolution that will not only increase biodiversity within the vineyard but in various types of farms throughout Israel.

Michal first worked at one of the largest wineries in Israel but found her home 11 years ago at Tabor Winery, Israel’s fifth largest – but it should be noted that there’s a big difference in volume between Tabor and the 4th largest winery. Tabor is located in Kfar Tabor in the foothills of Mt. Tabor in the Lower Galilee region. Kfar Tabor village was established by the Rothschild family of Château Lafite Rothschild in 1901, primarily for vineyards. In 1999, Tabor Winery was founded by four families of grape growers who had been growing grapes, uninterrupted, for five generations. Four of Israel’s important soils come together in Mt. Tabor: volcanic, limestone, terra rossa and loess. Michal is given free rein at Tabor as they trust her knowledge, experience and intuition. This trust is very important to Michal as when she first sought a job after graduate school, once receiving her Masters, she realized that the top Israeli producers were investing in the best equipment for their wineries but not investing in their vineyards; Tabor, with their long held respect for the land and its growers, was the ideal partner for her to start the process of focusing on the terroir.

The Society of the Preservation of Nature in Israel

The Society of the Preservation of Nature in Israel (SPNI) is a very well-respected organization in Israel, established in 1953, that protects and preserves Israel’s natural resources, environment and unique landscape. Over seven years ago, ecologists working for the SPNI approached Michal to see if she was willing to work with them to make the Tabor vineyards friendlier to biodiversity. The ecologists explained that when a vineyard was planted in the middle of nature, most of the time the grower destroys the eco-balance that was built over billions of years. They further explained that doing monoculture farming, ridding the area of most of the life that was originally there, and manipulating the land to create an unnatural eco-balance affected how animals live, eat and their migratory patterns while wiping out the rare plants and microorganisms that are important for the harmony of the environment.

Michal spent a lot of time talking to them and despite being a very accomplished and highly regarded viticulturalist, she stayed open to their arguments. Through time she noted, “They gave me a new perspective for life and when I used to look at my vineyards I would think that it was great to see everything around the vines cleared out, nice and clean, and then I started to think the opposite after I had my conversations with them. Through time I realized that it didn’t have to be like this [destroying everything else around the vines to get quality grapes] we can work with nature and make the vineyards part of the natural environment.”

The CEO of Tabor Winery, Oren Sela, with Michal Akerman

And so, seven years ago, Michal took on this viticulture revolution. She approached the CEO of Tabor Winery, Oren Sela, with her plan and a pretty large budget of what she would need. At first she thought that although her company had given her lots of leeway in the past, she may have been asking for too much. But the CEO approved her plan and budget without hesitation as he not only believed all the good this would do for Israel but he trusted that she would get higher quality grapes as an added result. As Michal noted with pride, “He said ‘if you believe in it, I believe in it.’” And so Michal started approaching all of their growers, with whom they have long-term contracts, from the northern wine regions of Galilee and Golan Heights to the central areas of the Coastal Plain (Samson) and Central Mountains (Judean Hills) to the desert in the south in Negev (Mitzpe Ramon) that range in climate, soil and aspect.

Barn Owl in One of the Tabor Vineyards

Since that time, she has been able to plant 400 trees (bringing back bears), building safe havens for smaller animals with piles of large rocks (bringing back storks, otters, lizards, rabbits, chameleons, mice and gophers), and once the gophers started causing problems by digging too many holes in the vineyards, the SPNI recommended that Michal start building nesting boxes in the vineyards to encourage barn owls to live there. She set up a camera to monitor the progress 24 hours a day and besides seeing wolves, foxes, jackals and wild boar (the vineyards are fenced in and the gates are left open when there aren’t ripe grapes on the vines), as well as the smaller animals mentioned before, she finally saw a female barn owl that was eating the mice and taking care of the gopher problem. The idea of the “cycle of life” that the SPNI was trying to get her to achieve in her vineyards was finally coming true; the owl feels so comfortable that she has not only made the nesting box her home but she has had several babies. Tabor Winery was so taken by this beautiful barn owl that she now graces their labels, which is part of their campaign that they are currently the only winery in Israel certified by SPNI.

Since there was less chemical spraying, a lot of the good predatory insects came back to the vineyards to help control the population of those insects that were detrimental for the vines and they used an arthropod (insect) vacuum throughout this seven year process to analyze the type of insects and flora that were existing in the vineyards. Also, Michal’s growers no longer use herbicides and they allow a natural cover crop between the vines that lower the microclimate of the inside of the vines as there is no reflected radiation from the bare soil as well as there being less of a problem with erosion.

Because Michal is having the growers constantly cutting down cover crops and allowing it to go back to the earth, they don’t have to add fertilizer, and even more shockingly, they no longer need to irrigate most vineyards. As she explained, “the vines’ roots went deeper into the soil because they felt integrated. The roots used to only go down about 30 to 40 centimeters [a little over a foot] and after digging holes with an excavator in many different sites they reach down seven to eight meters [23 to 26 feet]; after seven years the vines feel comfortable where they are.” She imagined what this could mean for the future of Israeli vineyards as the average vine lifespan in Israel is only 15 to 18 years as opposed to Europe’s old vines that are over 50 years old and in some cases can reach 100. Passionately she expressed, “And I think if we start to work like this we will be able to talk about vines that are 40, 50, 60 years old. We will not have to replant after 15 years as the vines will be stronger, more vital and just more comfortable in their environment.”

Michal admitted that it was not easy at first as many of the growers they work with thought she was crazy when she discussed this viticulture revolution. The idea that they would stop spraying herbicides and build piles of stones and nesting boxes for animals didn’t make sense. But Michal is not only extremely bright and talented, she also has emotional intelligence. And so she first approached the younger growers who were immediately onboard with the idea and through time, as the benefits showed in the vineyards, she would bring the older growers to visit these already converted plots that were not only an explosion of biodiversity but the vines looked stronger and they were producing higher quality grapes. She said it was “baby steps” but now all of the vineyards they work with are using the SPNI guidelines for increasing biodiversity. She is thrilled that now many of these growers are so pleased with the results that they are growing other crops such as olives, apricots and almonds in the same manner and now there are other wineries that are following Tabor’s lead.

The next thing on the horizon to look forward to is Michal growing Malbec and Chenin Blanc in desert conditions in the Negev wine region in the area of Mitzpe Ramon. This area has a very unique microclimate due to the Ramon Crater – the world’s largest erosion crater, or makhtesh, that has extreme diurnal temperature swings, from hot to cold, with a dry climate that creates low disease pressure; her vineyards there are as high as 3280 feet in altitude. Michal says, “I believe in this place in the desert” as it has a longer growing season and the grapes develop more complex aromas and flavors with a balance of ripeness and retained acidity.

Michal said that this is just the beginning of the viticulture revolution as they plan on improving the biodiversity for many years to come and she is hopeful that enough younger grower are just as enthusiastic as she is which means it will only get better for many decades to come. When thinking back on how she used to feel about vines only being a high quality vineyard if they superficially looked good from an aesthetic perspective she remarked, “I can’t see vineyards like this anymore.” She has never felt this excited with what she is experiencing in the vineyards, “I can feel it; the vines are stronger; I don’t need to irrigate them; I don’t need to fertilize them. It is amazing and I am excited every time we get close to harvest time as I look at the berries and the clusters and everything looks so healthy!” But every revolution needs backing and it is great that there is a company like Tabor that realizes the gem of a viticulturalist they have in Michal, as it takes not only a village to make the world a better place but large amounts of resources to make it come true.