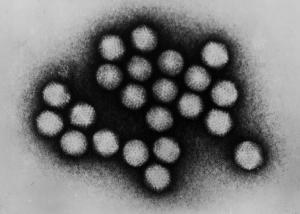 The new approach for virus pathogen removal was developed by a team from Ben-Gurion University of the Negev (BGU), University Duisburg-Essen, Germany, and the University of Illinois at Urbana-Champaign (UIUC). “This is an urgent matter of public safety,” the researchers said. “Insufficient removal of human adenovirus in municipal wastewater, for example, has been detected as a contaminant in US drinking-water sources, including the Great Lakes and worldwide.”

Adenoviruses can cause a wide range of illnesses that include the common cold, sore throat (pharyngitis), bronchitis, pneumonia, diarrhea, pink eye (conjunctivitis), fever, bladder inflammation or infection (cystitis), inflammation of the stomach and intestines (gastroenteritis), and neurological disease, reports the Centers for Disease Control and Prevention.

Norovirus, which can cause nausea, vomiting and diarrhea, is the most common cause of viral gastroenteritis in humans, and is estimated to be the second leading cause of gastroenteritis-associated mortality, according to BGU.

In the study, which was published in the March edition of the journal Water Research, Prof. Moshe Herzberg of the Department of Desalination and Water Treatment in the Zuckerberg Institute for Water Research at BGU and his group grafted a special hydrogel coating onto a commercial ultrafiltration membrane.

The “zwitterionic polymer hydrogel” repels the viruses from approaching and passing through the membrane. It contains both positive and negative charges and improves efficiency by weakening virus accumulation on the modified filter surface.

The result, the international scientists report, was a significantly higher rate of removal of waterborne viruses, including the human norovirus and adenovirus.

The need for such technology is growing rapidly, as the demand for drinking water rises thanks to a growing population, climate change, and higher demand for resources. A United Nations report shows that global water demand by 2050 is projected to have increased 55 percent from 2015.

And a World Health Organization (WHO) report shows that nearly 700 million people worldwide do not have access to adequate drinking water supplies.

According to the research team, current membrane filtration methods require intensive energy to adequately remove pathogenic viruses without using chemicals like chlorine, which can contaminate the water with disinfection byproducts.

The project was supported by the US Environmental Protection Agency and the German-Israeli Water Technology Cooperation Program, which is funded by the Ministry of Science & Technology of Israel and the Federal Ministry of Education and Research of Germany.

Israel has been involved in research into membranes for water treatment for many years, and has a worldwide reputation for its innovations and developments to bring potable water to the world’s thirsty.