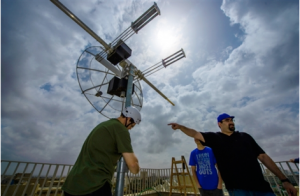 Installing the satellite dish that will receive the data transmitted from BGUSAT and send it to the ground station at BGU's EPIF. Aviran Sadon, a doctoral student who was instrumental in the BGUSAT process, is pictured gesturing in this photo from March 2016.

BGUSAT, Israeli academia’s first nanosatellite, will be launched into space on February 15, 2017 to conduct BGU scientific missions. It is the result of a five year joint project between BGU, Israel Aerospace Industries (IAI) and the Ministry of Science, Technology and Space. The satellite, 10x10x30 centimeters (a little bit larger than a milk carton) and weighing just five kilograms, is outfitted with innovative new cameras that can detect climate phenomena and a guidance system that lets the operators choose the areas to shoot and research through a dedicated ground station at BGU.

It is the first time any Israeli university will have access to data from an Israeli nanosatellite for research purposes. Its unique orbital path close to Earth’s atmosphere will enable BGU and TAU researchers to study scientific phenomena such as the Earth airglow layer. BGUSAT’s innovative cameras will allow researchers to position the satellite to take a variety of pictures from different angles each orbit if so desired, rather than having to maintain a single shooting angle every orbit.

The Israel Space Agency in the Ministry of Science, Technology and Space, IAI and BGU launched the project five years ago.   Constructing the satellite began two years ago at IAI’s space division. Science Minister Ofir Akunis said, “This is another step in advancing cooperation between the government, industry and academia in order to promote the Israeli space industry. Only such a collaboration with government backing will preserve the Israeli space industry’s global standing, and will promote research, create new jobs, all while safeguarding the essential interests of Israel.”

A nanosatellite is an intriguing new tool for academic scientific research. Prof. Dan Blumberg, BGU’s VP and Dean for R&D, said, “Nanosatellites enable space engineering and space research at costs that are affordable for academia. The reduced costs allow academia to assume a much more active role in the field taking advantage of the innovation and initiative of researchers and students.” 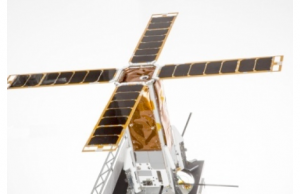 Satellite engineering is a constant balance between conservative and innovative thinking. Since large satellites are so expensive, not many risks can be taken that might jeopardize their mission. Nanosatellites, since they are much cheaper, offer a larger arena for space innovation. For BGUSAT, students and researchers were encouraged to think of new ways to build it and which systems to install.

IAI MBT Space Division CEO Col. (res.) Ofer Doron said, “We are proud to be part of an innovative technological project, which opens up the world of nanosatellites to new and varied scientific missions. For the first time, a dedicated computer with computing power similar to those of the larger satellites, but developed specifically for nanosatellites by the space division, has been installed. This computer has already been integrated into the SpaceIL spacecraft and the three Samson satellites. In addition, the space division and MicroGic Electronics have developed a unique camera that works in the short infrared range and can photograph a large array of weather phenomena. This nanosatellite is part of a series of educational and academic activities that we at IAI, as the national space division of Israel, consider an integral part of the Israeli space industry and are happy to lead.”

The BGU students and researchers who worked on BGUSAT integrated knowledge from a variety of fields such as software engineering, electrical engineering, planetary sciences, industrial engineering and management and more. This is the first project to showcase the enhanced space engineering capability that is being created at BGU. The goal is to be able to answer a call to build a nanosatellite from scratch “in house.”

Following the satellite’s launch, the Israel Space Agency has allocated an additional NIS 1 million to fund future research based on the data to be received from the satellite and sent out a call for proposals. BGU and TAU have already submitted a joint proposal to study Earth’s airglow layer.

“We expect challenging ideas from the Israeli research community,” said Avi Blasberger, Head of the Israel Space Agency, and added, “This is the first time that Israeli researchers will have the opportunity to receive information directly from a completely blue and white satellite, without having to go through other countries or research agencies.”

Through the BGUSAT cameras, researchers will be able to track atmospheric gases like CO2 in order to understand climate change, to examine changes in ground moisture that could be an indicator of desertification and affect agricultural development or to monitor plant development in different regions.

BGUSAT will be launched February 15, 2017 on the PSLV launcher from the Satish Dhawan launching pad in India along with 103 other nanosatellites.